Astounding Animals of Mass Destruction. Real World Weapons of Wildlife and Warfare. Ten insane example of adapting animals to weapons in both life and death situations. As they say, all is fair... 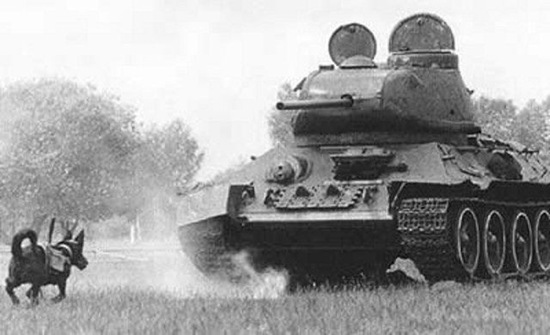 Anti-tank dogs (Russian: Собаки-истребители танков or Противотанковые собаки; German: Panzerabwehrhunde or Hundeminen, "dog-mines") were dogs taught to carry explosives to tanks, armoured vehicles and other military targets. Although the original dog training routine was to leave the bomb and retreat so that the bomb would be detonated by the timer, this routine failed and was replaced by the impact detonation procedure which killed the dog in the process.

They were actively trained by the Soviet and Russian military forces in 1930–1996 and used in 1941–1942 against German tanks in World War II. The U.S. military trained anti-tank dogs in 1943 for use against fortifications, but never deployed them. Dogs strapped with explosives were unsuccessfully used by Iraqi insurgents in 2005. [More] [Video] 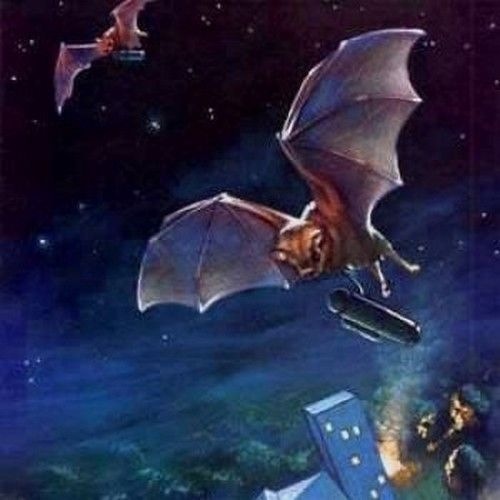 Bat bombs were bomb-shaped casings with numerous compartments, each containing a Mexican Free-tailed Bat with a small timed incendiary bomb attached. Dropped from a bomber at dawn, the casings would deploy a parachute in mid-flight and open to release the bats which would then roost in eaves and attics. The incendiaries would start fires in inaccessible places in the largely wood and paper construction of the Japanese cities that were the weapon's intended target.

Developed by the United States during World War II, the plan was to release bat bombs over Japanese cities having widely-dispersed industrial targets. The bats would spread far from the point of release due to the relatively high altitude of their release, then at dawn they would hide in buildings across the city. Shortly thereafter built-in timers would ignite the bombs, causing widespread fires and chaos. [More] [Video] 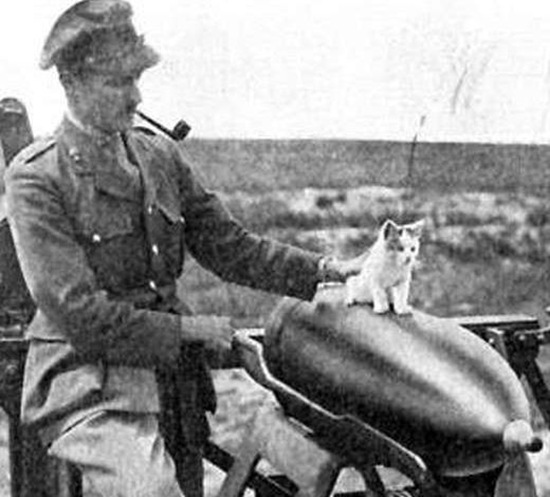 In World War II, the United States’ OSS (Office of Strategic Services, the precursor of the CIA) needed a way to guide bombs to sink German ships. Somebody hit upon the inspiration that since cats have such a strong disdain of getting wet and always land on their feet that if you attached a cat to a bomb and drop it in the vicinity of a ship, the cat’s instinct to avoid the water would force it to guide the bomb to the enemy’s deck.

It is unclear how the cat was supposed to actually guide a bomb attached to it as it fell from the sky but the plan never got past the testing stages since the cats had a bad habit of becoming unconscious mid-drop. [More here and here] 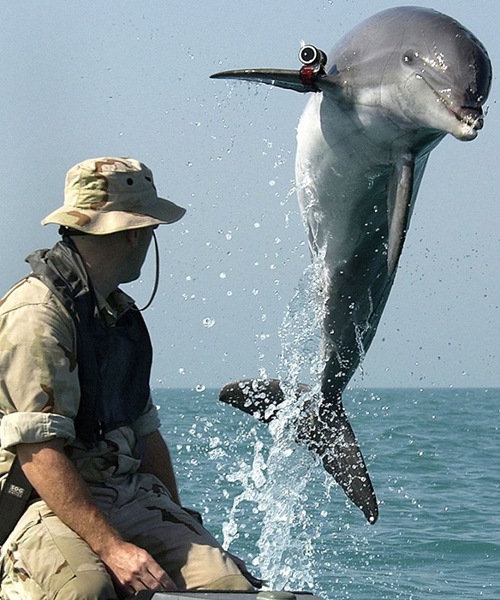 A military dolphin is a cetacean trained for military uses. The United States and Russian militaries have trained and employed oceanic dolphins for several reasons. Such military dolphins have been trained to rescue lost naval swimmers or to locate underwater mines.

The U.S. Navy trains dolphins and sea lions under the U.S. Navy Marine Mammal Program, which is based in San Diego, California. Military dolphins were used by the U.S. Navy during the First and Second Gulf Wars. About 75 dolphins are in the program.

The Soviet Navy operated a research facility to explore military uses of marine mammals at Kazachya Bukhta, near Sevastopol. The Russian military is believed to have closed its marine mammal program in the early 1990s. In 2000, the press reported that dolphins trained to kill by the Soviet Navy had been sold to Iran.

Due to the secrecy of such practice, rumours of military dolphins include training them to lay underwater mines, to locate enemy combatants, or to seek and destroy submarines using kamikaze methods. There has even been speculation about the potential development of sophisticated equipment, such as poison darts, sonar jamming devices, and so on for dolphins, and about combat between cetaceans of both superpowers.

A war elephant [more here] is an elephant trained and guided by humans for combat. Their main use was to charge the enemy, trampling them and breaking their ranks.

They were probably first employed in India, the practice spreading out across South-East Asia and westwards into the Mediterranean. Their most famous use in the West was by the Greek general Pyrrhus of Epirus and in great numbers by the armies of Carthage, especially under Hannibal.

In the Mediterranean, improved tactics reduced the value of the elephant in battle, while their availability in the wild also decreased. In the east, where supplies of animals were greater and the terrain ideal, it was the advent of cannon that finally concluded the use of the combat elephant at the end of the 19th century, limiting them thereafter to engineering and labour roles. 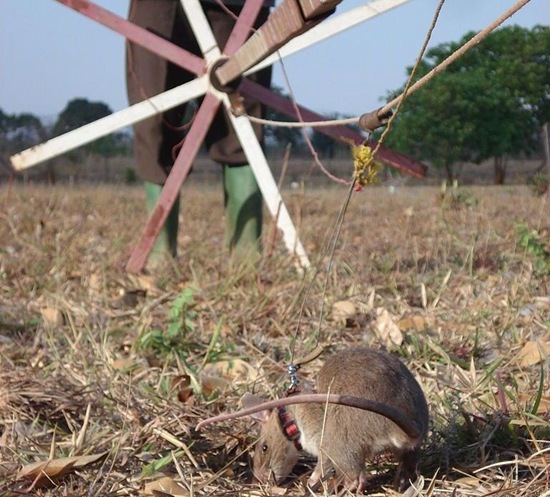 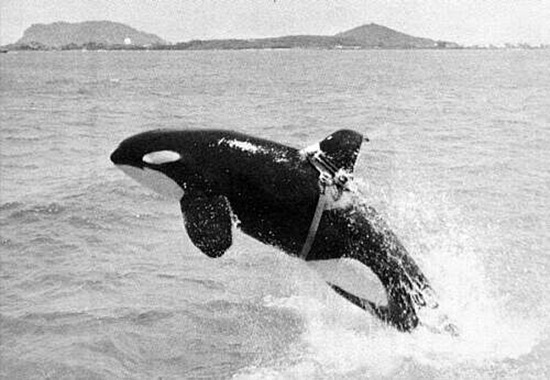 In a project, called Deep Ops, a pilot whale and two killer whales demonstrated their ability to recover objects from greater depths. The recovery device the whales attached to the target object, a dummy torpedo containing an acoustic beacon, incorporated a hydrazine gas generator which was activated upon attachment of the device to the torpedo. The generated gas filled a large lift bag which raised the torpedo to the surface.

The picture shows an orca named "Ahab" enlisted in the navy working off the coast of Hawaii. Ahab [more photos here] was one of two orcas working in the navy in Hawaii retrieving decoy torpedoes on the ocean floor. The other orca named Ishmael swam off when they were brought out to the open ocean and he never returned.

Ahab was captured in 1968 in October off the coast of Washington. He was a member of either J or L pod. He died in 1974 after a short life of only 5½ years in captivity. 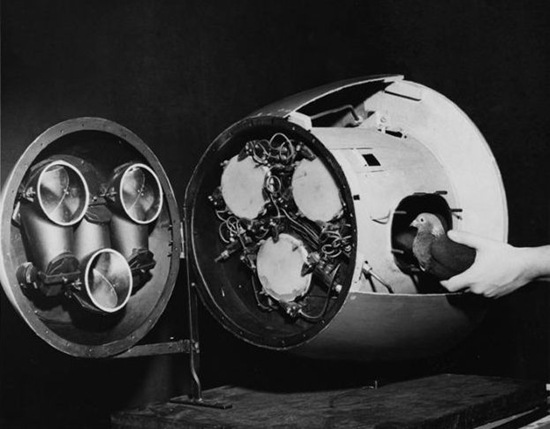 During World War II, Project Pigeon (later Project Orcon, for "organic control") was American behaviourist B. F. Skinner's attempt to develop a pigeon-guided missile. The control system involved a lens at the front of the missile projecting an image of the target to a screen inside, while a pigeon trained (by operant conditioning) to recognize the target pecked at it. As long as the pecks remained in the centre of the screen, the missile would fly straight, but pecks off-centre would cause the screen to tilt, which would then, via a connection to the missile's flight controls, cause the missile to change course.

Although sceptical of the idea, the National Defense Research Committee nevertheless contributed US$25,000 to the research. The program was cancelled on October 8, 1944, because the military believed that "further prosecution of this project would seriously delay others which in the minds of the Division have more immediate promise of combat application." Project Pigeon was revived by the Navy in 1948 as "Project Orcon"; it was cancelled in 1953 when electronic guidance systems' reliability was proven. [Video] 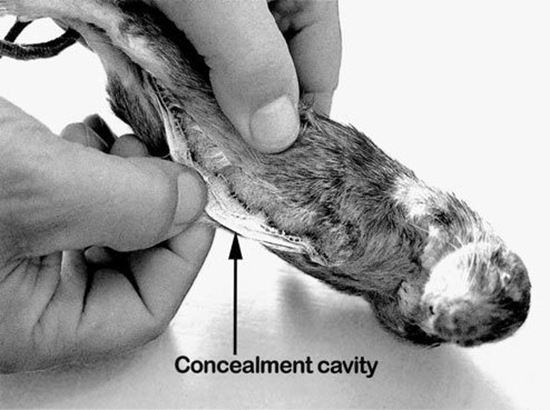 Dead rats were prepared for use by the British Special Operations Executive in World War II against Germany. Rat carcasses were filled with plastic explosives, to be left in locations such as factories where, it was hoped, the stoker tending a boiler would likely dispose of the unpleasant discovery by shovelling it into the furnace, causing it to explode.

The rats contained only a small amount of explosive; however, a puncture of a high-pressure boiler could trigger a devastating boiler explosion. [More] 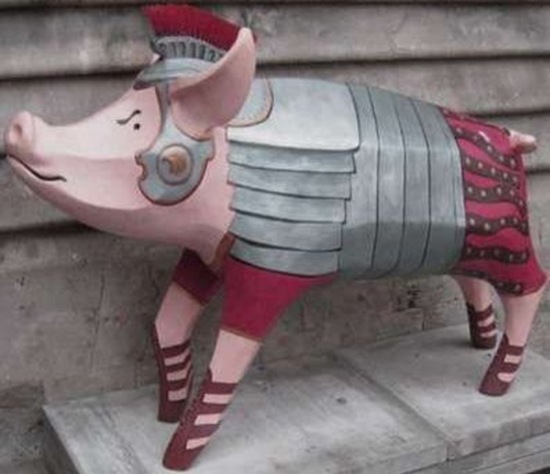 War pigs are pigs said to have been used - at most, rarely - in ancient warfare as a countermeasure to war elephants. Pliny the Elder reported that "elephants are scared by the smallest squeal of the hog". The Romans would later use the squeals of pigs to frighten Pyrrhus' elephants. Procopius, in book VIII of his History of the Wars, records the defenders of Edessa using a pig suspended from the walls to frighten away Khosrau's siege elephants.

While the above use of pigs in war is plausible, another historical reference - incendiary pigs or fire pigs - is much less so. Aelian reported that Antipater's siege of Megara during the Wars of the Diadochi was broken when the Megarians poured oil on a herd of pigs, set them alight, and drove them towards the enemy's massed war elephants. The elephants bolted in terror from the flaming squealing pigs often killing great numbers of the army the elephant was part of.