ASTONISHING SPECTACLE OF HUMMINGBIRDS IN FLIGHT 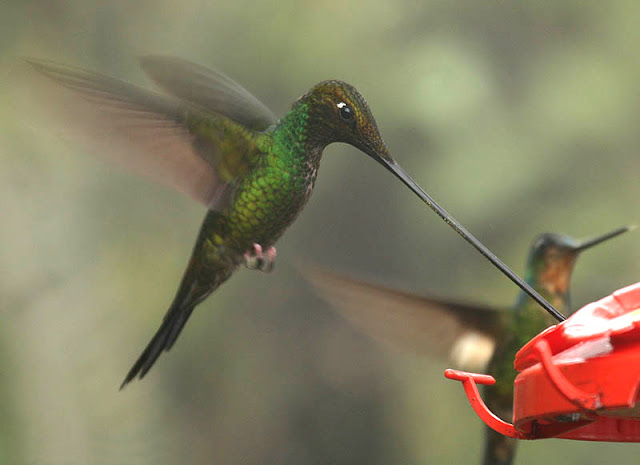 Nothing can quite prepare you for the exquisite sight of a hummingbird on the wing. Nature has truly spoiled us with this astonishing spectacle. Take a look as the different species take flight in their search for food and marvel at the aerodynamics of one of the world's truly astonishing species.

[Source: The Ark In Space. Edited.] 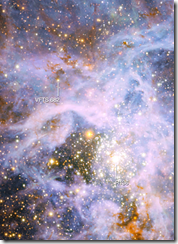 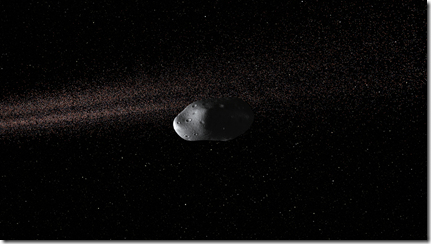 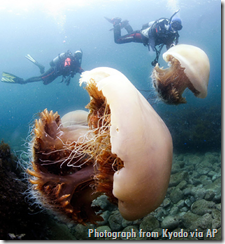 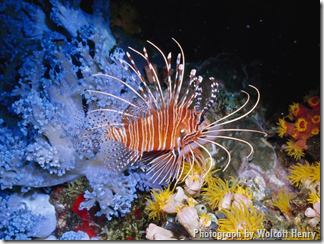 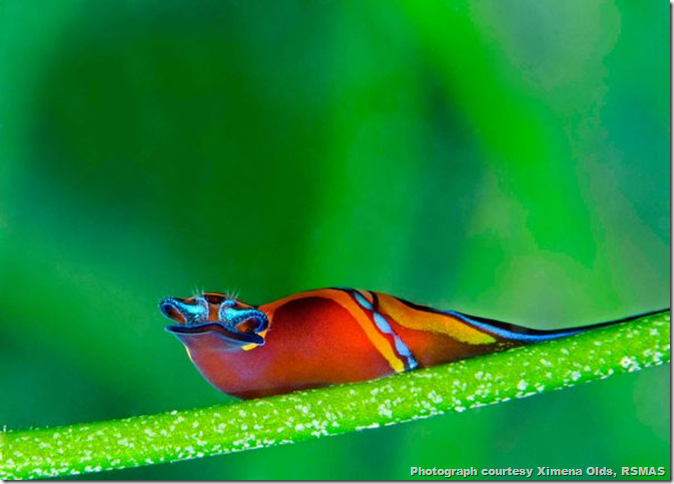 A head-shield sea slug pauses on a blade of grass in the U.S. Virgin Islands in the winning image of the University of Miami's 2012 amateur Underwater Photography Contest, whose results were announced this month.

"Everybody looked at that photo and said, Wow...Everything is just so appealing to the eye," according to judge Michael Schmale, an amateur underwater photographer and professor of marine biology and fisheries at the university.

The judges - Schmale and two other underwater photographers - were also impressed by how sharply photographer Ximena Olds captured the tiny creature, which is less than an inch (2.5 centimetres) long.

"One of the great things about a contest like this is that it gets people seeing the ocean through other eyes," Schmale said.

"A really good photographer, like a painter or sculptor, doesn't just make a snapshot of something - but they capture something about the environment that strikes them." 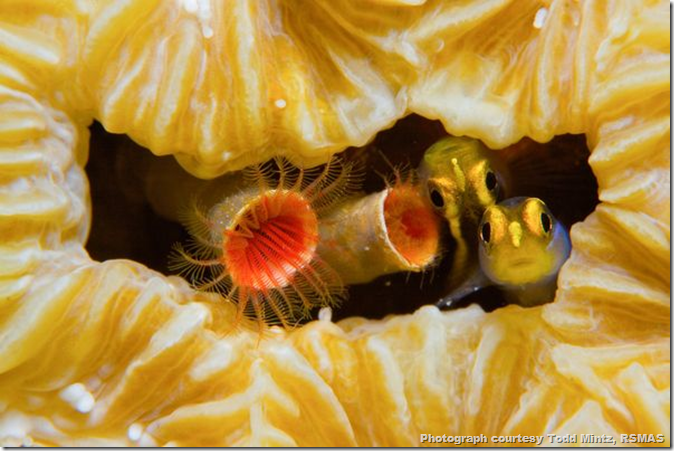 Two yellow-nose gobies peek out of a brain coral off the Caribbean island of Bonaire (map) in a macro, or close-up, picture.

"There's something really appealing at looking at the macro world," Schmale said. "All three of the [winning] macro photos made a huge impression on me."

Created in 2005 for South Florida photographers, the Rosenstiel School of Marine and Atmospheric Science's Underwater Photography Contest has surprised organizers by catching on internationally. This year's competition saw 500 entries from around the world, Schmale noted. 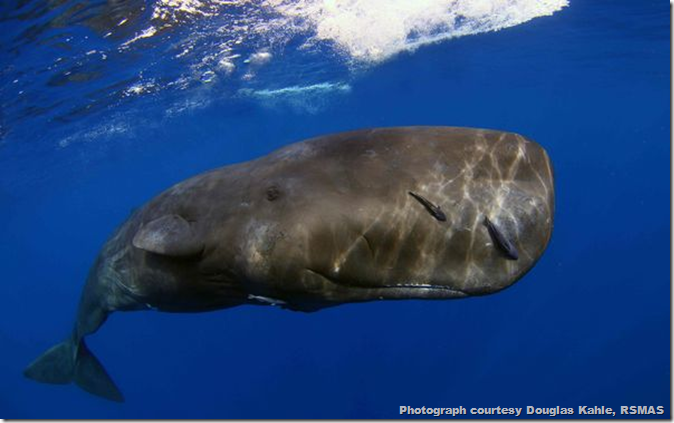 Pictures of whales in the open ocean "often take my breath away, because I realize what an incredible encounter that must have been - to be that close to a juvenile sperm whale [pictured], which, by the way, probably has a watchful mother nearly," Schmale said.

In this image captured near the Caribbean island of Dominica, "you see the dappled sunlight on the whale's nose - the whole feeling of that photo conveys just an incredibly dramatic scene." 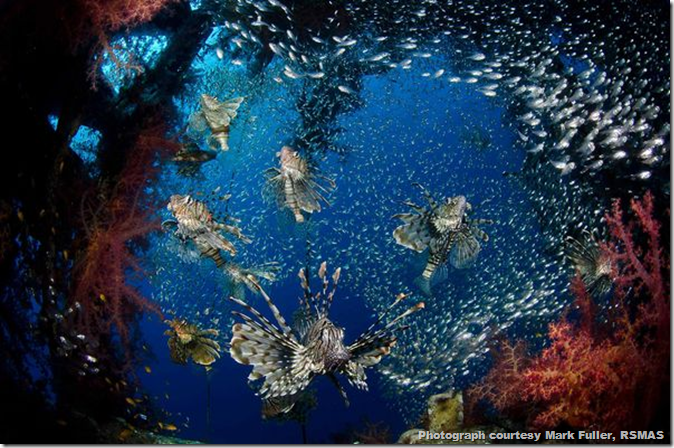 "What they'll often do is use their pectoral fins like fans and gently herd a school of little fish in front of them...and then inhale them once the fish is in front of their mouth," Schmale said.

This "beautiful" fish has spread beyond its native environment, however, and is now a threat to other fish species in the Caribbean. 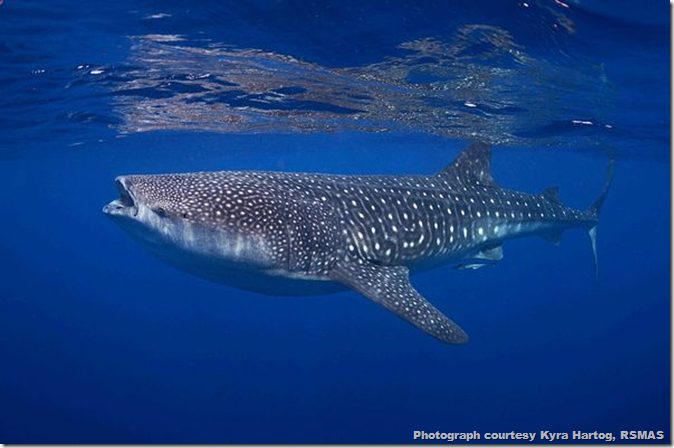 A whale shark feeds at the surface near Isla Mujeres, Mexico.

The ocean's biggest fish - reaching lengths of up to 40 feet (12 meters) - whale sharks usually stick to themselves as they cruise tropical waters looking for plankton and other small prey.

But in 2009 aerial and surface surveys spotted a swarm of at least 420 of the sharks rubbing fins as they gorged on fish eggs. (See pictures of the whale shark swarm.) 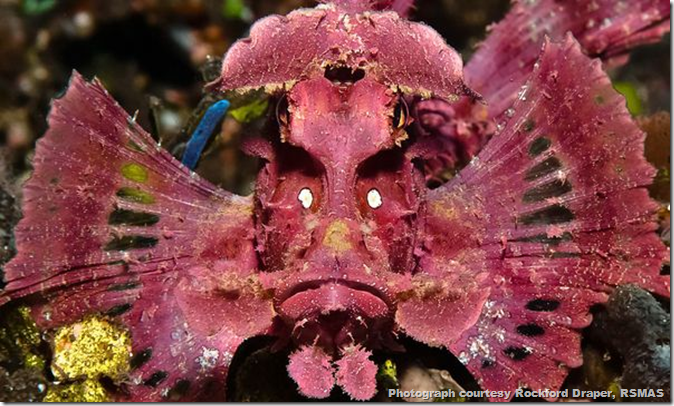 An Eschmeyer's scorpion fish stares down the camera in Bali, Indonesia.

The "remarkable and very rare fish" has some clever adaptations to blend into its environment, Schmale said.

In addition to its camouflaging colours, the fish has transparent spots in its pectoral fins. The "windows" help break up its outline, making it easier to sneak up on prey. 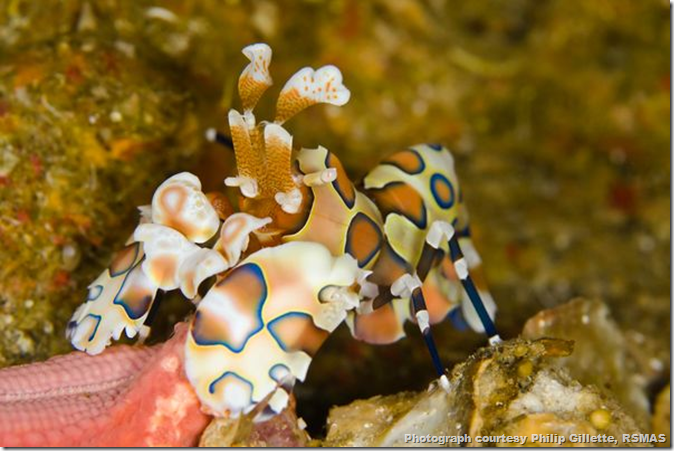 Harlequin shrimp - such as the one in this winning picture taken in Thailand's Similan Islands - mate for life, and the pairs work together to capture and kill their favourite prey: starfish.

One of the shrimp locates a starfish, flips it over, and drags the prey into the shrimp's lair. The couple then devours the starfish's internal organs, starting from the tips of its arms down to its central disk - keeping their victim alive for as long as possible. 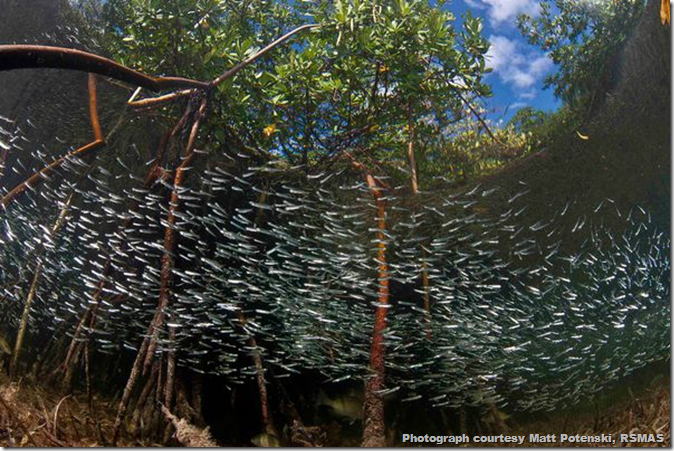 Schools of fish flash among red mangrove in the Bahamian island of South Bimini.

Mangroves serve as vital, intermediate nurseries as coral reef fish journey from their "cribs" in sea-grass beds to the large coral reef ecosystems where the fish spend their adulthoods. 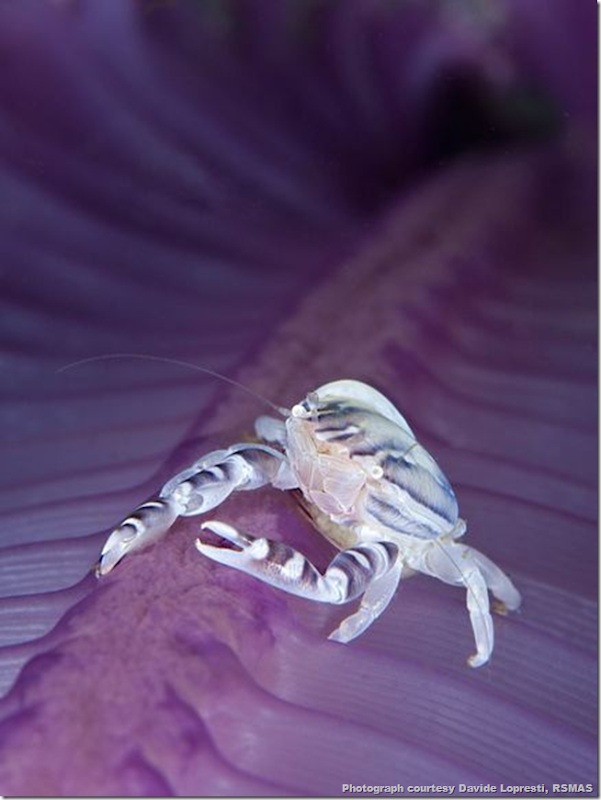 Perhaps only a half inch (1.3 centimetres) long, according to Schmale, a porcelain crab perches on a feathery sea pen in Komodo National Park, Indonesia.

"The colour palette is almost monochromatic...I thought that was beautiful," Schmale said. 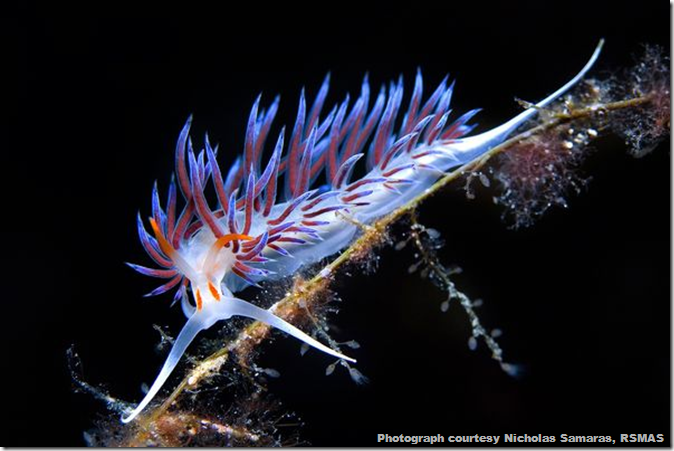 Nudibranchs - such as this Cratena peregrina caught on camera off Greece - are roughly finger-size sea slugs whose 3,000-odd species thrive in seas cold and warm, shallow and deep. Whereas their ancient ancestors slipped across the seafloor in defensive shells, these gastropods come armed with toxic secretions and stinging cells. 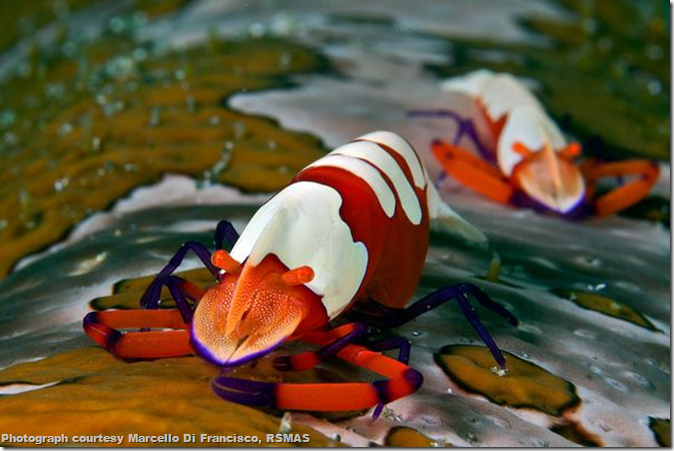 Emperor shrimp hitchhike on the back of a sea cucumber in Ambon, Indonesia.

The tiny shrimp - each eye is only a millimetre wide - use the sea cucumbers as dining cars, eating whatever passes by.

The "picture captures that environment - they're riding on top of the train," Schmale said. 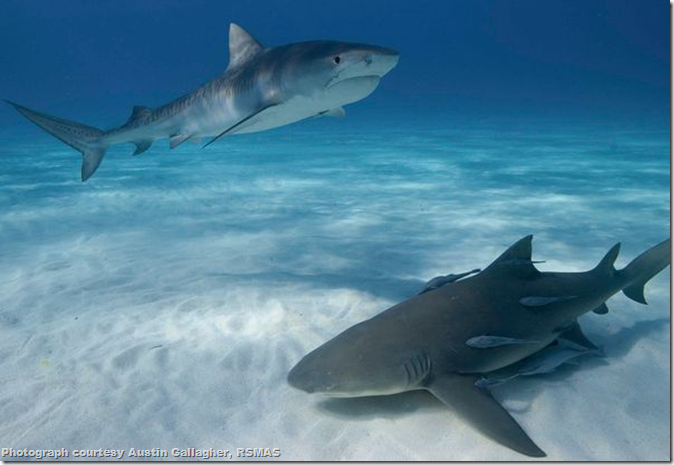 A young tiger shark (top) and lemon shark hover near the sea bottom in the Bahamas.

A widespread species, the tiger shark is comfortable in both the open ocean as well as shallow coastal waters, according to the Florida Museum of Natural History. 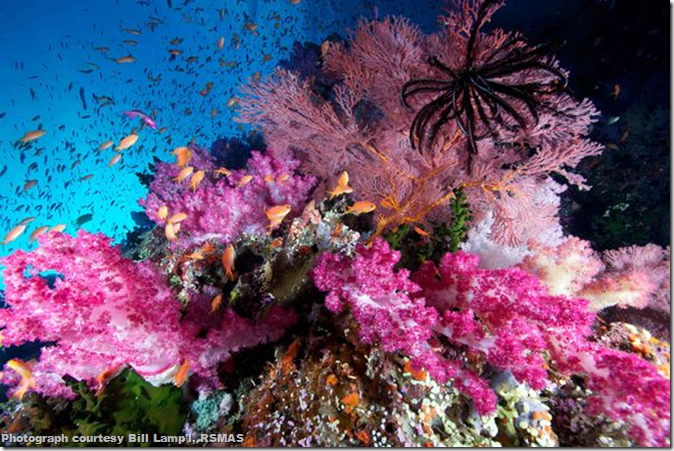 Orange anthias fish swim amid soft corals in the Fiji Islands. Coral reefs cover less than one percent of the ocean floor but support about 25 percent of all marine creatures, according to the Coral Reef Alliance. 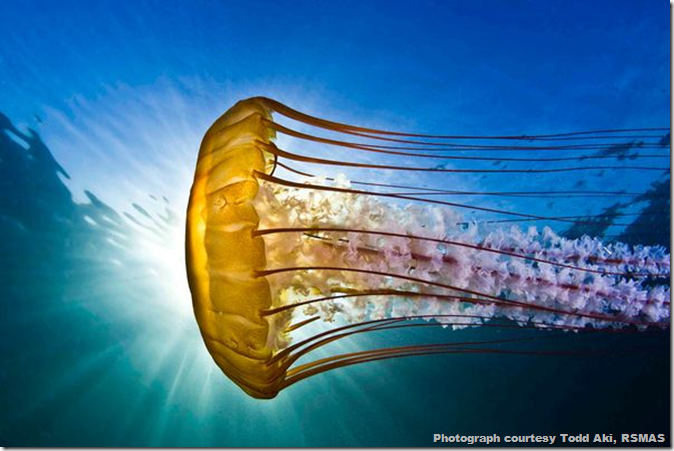 Its trailing appendages covered in stinging cells, a sea nettle typically transfers captured prey from the jelly's slender tentacles to its ruffled mouth-arms to its mouth, hidden inside the sea nettle's bell. (See pictures of giant jellyfish off Japan.)