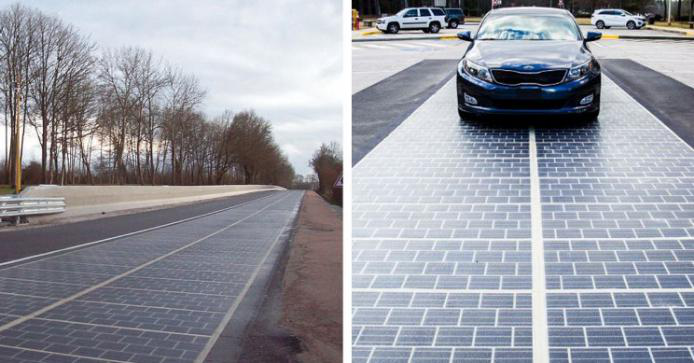 6 Examples of Solar Powered Roads That Could Be a Glimpse of the Future
By Christopher McFadden, Interesting Engineering, 13 August 2019.

Since the ground space is already in use, this strategy makes complete sense - as long as it's safe! Although mostly-experimental at present, it is not out of the question that they may, one day, replace traditional asphalt for paving our way.

How much would solar roadways cost?

The cost of solar roadways depends entirely on the system installed and the area it covers. While there are few examples around the world today, and most are experimental, we do have some example data.

For example, one of the first ones in the world, a small 1-km stretch in a French village, cost 5 million Euros to develop and install.

Another example, built by Solar Roadways, was installed in Jeff Jones Town Square in Sandpoint, Idaho. This 14 m2 installation cost somewhere in the region of $60,000.

Yes, they can, but they are not a replacement for solar energy. Any artificial light source produces photons that can then be harnessed by the solar cell.

But if you were using LEDs or any other artificial light source, as a means of generating electricity you would receive a net loss from the electricity consumed by the bulb and other system losses.

Most current solar panels also have an efficiency of around 15% or so. This means that 85% of the light they receive is effectively wasted.

LEDs are also not 100% efficient for their conversion of electricity to light.  The Second Law of Thermodynamics also means that no matter how good technology gets, neither of these devices will ever be 100% efficient.

In some small portable calculators and other electronics, amorphous solar cells are used in place of batteries to recycle energy from artificial lighting and, of course, harness power from direct/indirect sunlight. 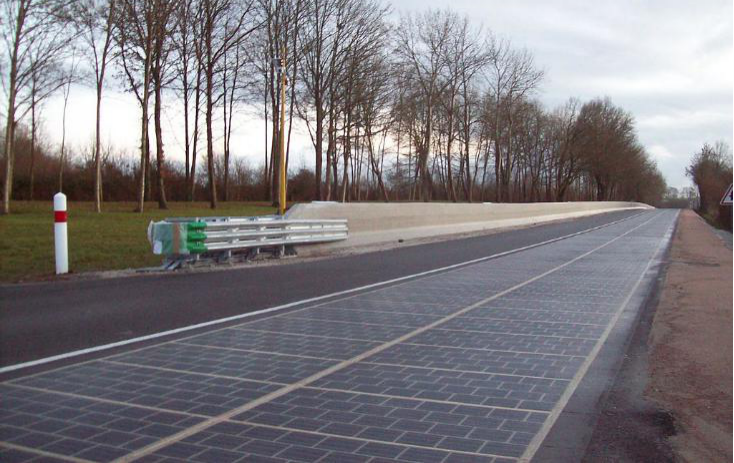 For solar roads to be safe to use in all weather it will be necessary for them to be able to deal with precipitation of all kinds safely - not just snow. But there are some specific examples in development that have been designed to be able to melt snow in winter.

One example is from an Idaho-based company called Solar Roadways. Their modular solar road tiles contain heating elements that are able to prevent snow and ice accumulation.

These tiles are also made from tempered glass that has a specially designed tractioned surface that is equal to traditional asphalt.

6 interesting solar roads around the world

Here are some examples of solar roads from around the world. The following list is not exhaustive and in no particular order.

Consisting of somewhere in the region of 2,880 m2 of solar panels, this solar road in France was one of the first in the world. It was built using Colas' Wattway tech and runs for 1-km in Tourouvre-au-Perche.

Colas are part of the giant French telecoms group Bouygues and was financed by the state.

This pioneer in solar roadways is said to be able to generate enough power to keep street lights on within the small village. It cost around 5 million Euros and is used by around 2,000 motorists a day.

2. Wattway's solar roads have also been installed in Georgia

After the success of the Wattway's installation in France, another test stretch was installed near the Alabama and Georgia border. The Ray C. Anderson Foundation helped fund a 50 m2 of the first Wattway pilot in the United States.

The pilot formed part of the foundation's The Ray project which is a 29-kilometer living laboratory for testing renewable tech. This project also includes bioswales and a solar-powered electric car charging station.

"Wattway debuted with a pilot site in France in 2015, and through a partnership with Hannah Solar and Georgia DOT... The energy generated from The Ray’s Wattway powers the Georgia Visitor Information Center adjacent to the project." - theray.org.

Back in 2018, China completed works on a 1-km stretch of an expressway in Jinan. Developed by Qilu Transportation Development Group it consists of three distinct layers.

Its base is made primarily of insulation, with solar panels in the middle layer, and transparent concrete capping the lot.  The 1-km stretch makes up around 5875 m2 over two lanes and one emergency lane.

This solar road was designed to be able to generate around 1 million kilowatt-hours per year.

Funnily enough, soon after construction, some parts of the solar road appear to have been robbed out. However, the panels wouldn't have had much commercial value so it is thought they were taken to reverse engineer.

4. This bike path in The Netherlands was another pioneer 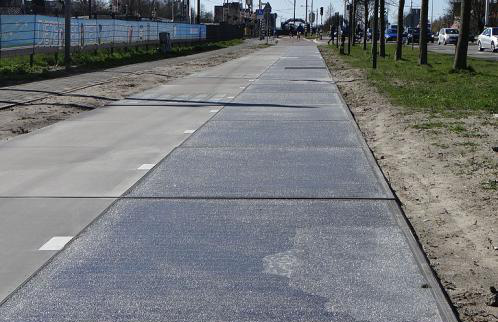 Installed in Krommenie, The Netherlands, a bike lane has been covered in special solar panels. As interesting as this is alone, the project actually surpassed all expectations from its designers.

The solar bike path runs for around 70 meters and each panel is protected from physical damage with 1 cm of protective coating.

Over a one year period, the solar cycle path was able to generate 70 kilowatt-hours per squared meter. That's enough to power around three houses.

It was built using SolaRoad, and according to the designers TNO, most users don't even notice the difference to normal-tarmac. 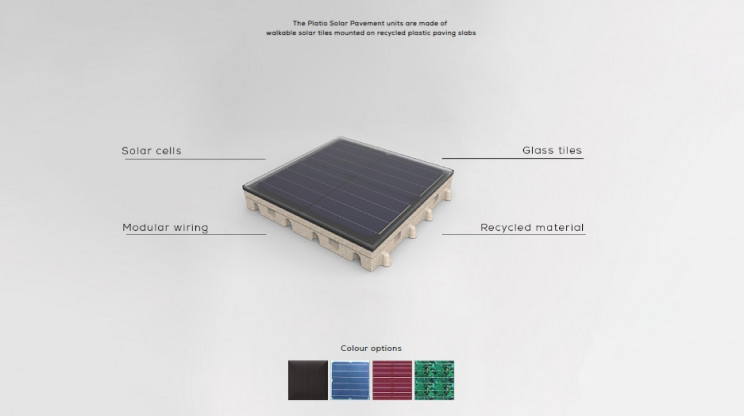 A company called Platio recently installed a 4.6 m2 stretch of sidewalk with solar panels. Made from recycled plastic, the sidewalk serves a dual purpose.

Pedestrians can safely traverse it while it generates electricity to charge electric vehicles.

Platio installed the 720-watt peak capacity system at a Prologis facility in Budapest. The complete installation process only took one day.

When the solar sidewalk isn’t busy charging EVs, the energy it generates helps power a nearby office building.

6. Solar Roadways hope to roll out across the U.S.

An Idaho-based company, Solar Roadways, hopes to roll out solar-powered roads across the United States. Their hexagonal solar road tiles not only generate electricity but can be used as digital driving surfaces using LEDs that can be controlled remotely.

Each tile consists of three discrete layers. A base recycled material layer that contacts the ground, a middle section that contains all the electronics, and an upper layer of reinforced glass that can support the weight of 113-tonne (13,000 kgs) truck.

The power generated by the tiles could be used to power EVs through induction technology, stored or connected directly into the national grid for use by nearby infrastructure, towns, and cities.

"We have completed three funding contracts with the U.S. Department of Transportation. People from all over the world decided to help speed our progress via our Indiegogo Campaign which you can read more about on our Funding page. Our goal is to modernize the infrastructure with modular, intelligent panels while producing clean renewable energy for homes and businesses." - Solar Roadways.