7 MOST DISGUSTING WONDERS OF THE WORLD 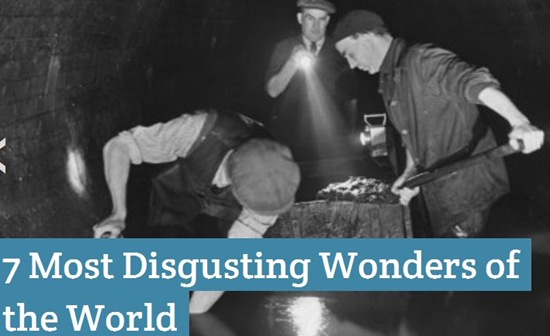 7 Most Disgusting Wonders of the World
By Talal Al-Khatib, Discovery News, 8 August 2013.

The Great Pyramid of Giza, the Great Wall of China, the Taj Mahal, Chichen Itza, the Colosseum - all examples of human engineering at its greatest that have received the designation of "wonder of the world," depending on whose list you follow.

But just as the awe-inspiring product of our industriousness can live through the ages, so too can the often disgusting by-products of our civilization cause lasting damage to the environment. The discovery of a 15-ton blob of congealed fat in a London sewer, dubbed Fatberg, shows the output of the waste habits of a single community.

And Fatberg doesn't even compare to these seven dirtiest, man-made wonders of the world. 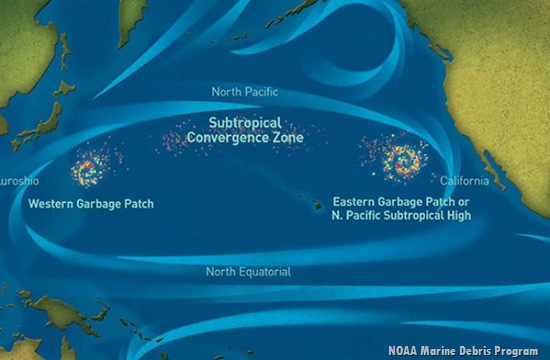 The Great Ocean Garbage Patch can be better described as a pair of patches within the North
Pacific Gyre.

Think of a toilet drain that never clears, but instead continues to pull in more and more waste, and you'll have an idea of the problem that is the Great Ocean Garbage Patch.

Although often erroneously reported as being a single mass twice the size of Texas, the Great Ocean Garbage Patch is really the accumulation over two separate regions that have formed a soup of confetti-like bits of plastic, about 13,000 pieces per square kilometre, with the occasional large item floating beneath the surface.

The Great Ocean Garbage Patch, and others like it, are a threat to both marine and avian wildlife, with the plastics releasing chemicals into the water and they break down, as well as ending up in the food chain. So we're basically eating our own trash. 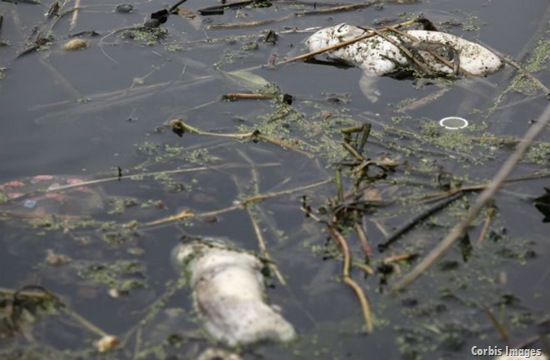 The bodies of decomposing pigs float in the water of the Jiapingtang River in China.

The Jiapingtang River outside Shanghai, China, this year earned a reputation for floating animal horror shows that have put a spotlight on the People's Republic's agriculture industry.

In April, some 16,000 rotting pig carcasses had to be removed from the Jiapingtang, a tributary of the Huangpu River that supplies drinking water to over 23 million people, as TreeHugger reported. Shortly after the pigs were fished out of the water, around 1,000 dead ducks soon surfaced, which had to be removed.

The mass animal deaths have taken a toll on the Jiapingtang, with reports that the water has turned an inky black, holds a thin layer of slimy algae on its surface and smells like a giant, backed-up drain.

ANALYSIS: Dead Pigs? Not a Big Deal in Shanghai River 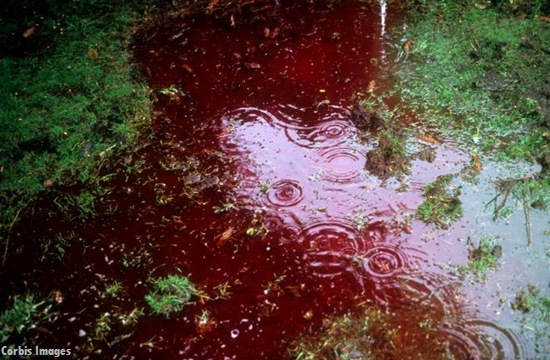 A river of blood coming from a meat packing facility was discovered by a drone hobbyist in 2010.

A drone hobbyist based out of Dallas found an equally grisly river outside of a meat packing plant in 2012.

From the air, the pilot photographed a large, oozing river of blood originating from the plant and pouring into the Trinity River, a violation of the law for which the plant's operators, Columbia Packing Co., Inc., were investigated by authorities, as CBS Dallas/Fort Worth reported at the time. 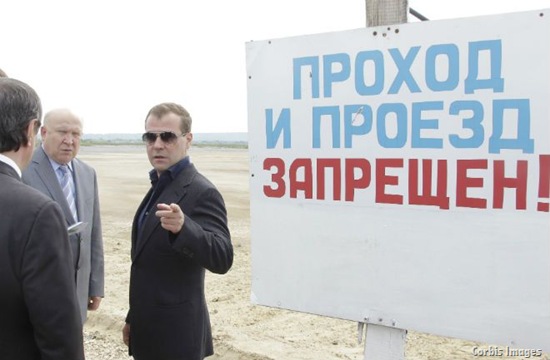 In 2011, then-Russian President Dmitry Medvedev visited a sludge reservoir near the city
of Dzerzhinsk.

Being the largest chemical weapons site in Russian history isn't exactly a source of pride for the locals of Dzerzhinsk, Russia, who must cope with the legacy of improperly disposed chemical waste.

Home to about 300,000 people, Dzerzhinsk between 1930 and 1998 has had 300,000 tons of toxic waste dumped within its borders, with some pollutants reaching levels 17 million times what is considered the safe limits of exposure, according to TIME. 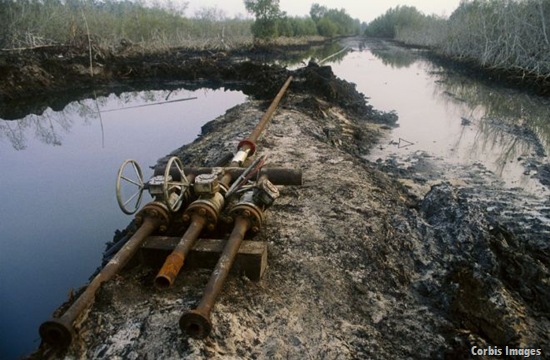 This photo shows the damage done from a single oil spill in 1999.

The Deepwater Horizon oil spill in April 2010 showed how much damage a single, massive crude oil leak can do to the environment. The Niger Delta in Africa, on the other hand, is a demonstration of the havoc thousands of small oil spills can wreak on the landscape.

More than 6,800 oil spills have been recorded in the region, totalling anywhere from 9 million to 13 million barrels lost over the 50 years since oil drilling began in Nigeria, as reported by CNN. Home to 31 million people, the majority of whom depend on the land for their livelihoods, the 700,000-square-kilometre Niger Delta is one of the most largest and more vital wetlands in the world.

Cleaning up the contamination caused by the oil industry could take up to 30 years with a US$1 billion down payment needed for the first five years, according to the United Nations. 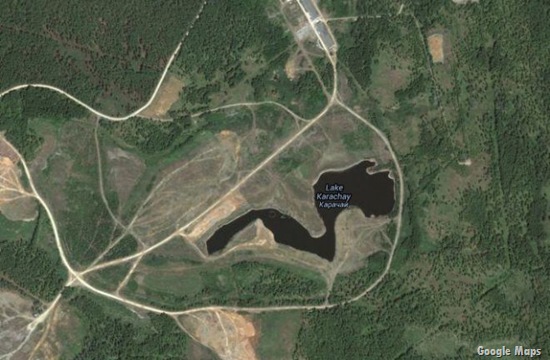 For decades, Lake Karachai in Russia's Chelyabinsk region was a dumping ground for nuclear waste by the Soviet Union. The lake, thought to be one of the most polluted sites on Earth, is so toxic that spending just a single hour standing on the shoreline is more than enough time to receive a lethal dose of radiation, according to measurements taken in 1990.

Thousands of concrete blocks have since been dumped into the lake to prevent radioactive sediment from shifting, but the lake and the surrounding area will continue to be toxic of hundreds of years.

More: (1) Is this the most polluted place on Earth? The Russian lake where an hour on the beach would kill you; (2) Meet the lake so polluted that spending an hour there would kill you. 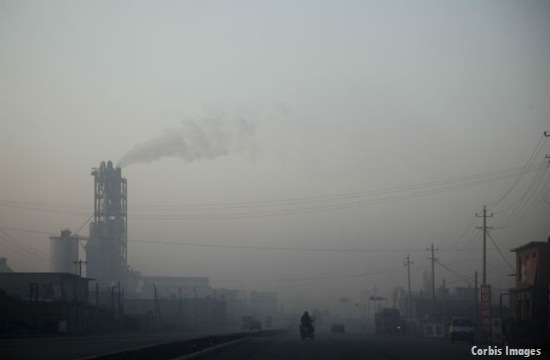 A common saying about Linfen is that laundry hung out in the city air will turn black before it
gets dry.

Given the superlative "the world's most polluted city" more than once over the years, Linfen, China, was once renowned for its clean spring water and fertile farmland in the 1980s, according to TIME. But a booming coal industry that produced power plants, as well as legal and illegal mines, led to severe air and water quality concerns that transformed what was once a floral city into an ashy landscape.

Efforts to turn around what has been dubbed China's Chernobyl through the closing of inefficient power stations and illegal mines have helped the city turn a corner, though officials admit environmental clean-up is still a work in progress.