FUGU LUGGAGE: AN EXPANDING SUITCASE THAT GOES FROM CARRY-ON TO CHECK-IN SIZES

An Expanding Suitcase That Goes From Carry-on To Check-in Sizes
By Andrew Liszewski, Gizmodo, 24 November 2014.

Expanding luggage designed to accommodate your dirty clothes, souvenirs, and stolen towels at the end of a vacation are nothing new. But the FUGU luggage doesn't just add a couple of extra inches of capacity. It expands from nine inches tall to 27 inches tall, meaning you could actually pack for a whole extra person should you find yourself suddenly married after a Vegas weekend.

And instead of using a spring-based mechanism to expand and collapse the FUGU bags, the suitcase relies on air bladders in its fabric walls that are inflated and deflated using a built-in pump. Or a strong set of lungs, in a pinch, if the battery is dead and you've got no place to plug in you baggage.

When collapsed the FUGU bags meet the carry-on size regulations for most airlines, and even though there's an air pump and a bunch of deflated bladders inside, there's still plenty of room to pack a weekend's worth of clothing. And when it's fully expanded, there's even an optional shelving system that can be installed, turning the FUGU into your closet away from home. Just be aware that if you've filled the FUGU while it's expanded, it's not going to magically shrink back down and squeeze into an overhead bin. You're going to have to suck it up and check your bag.

The creators of the FUGU have turned to Kickstarter to help fund the initial production run of the luggage, and with a donation of US$219 you can pre-order one for yourself. Just don't go booking some winter travel and expect to fly with it during the holidays this year, because delivery's not expected until August of next year. That also means the suitcase's design has yet to be finalized, and it will still be a few months before it's actually ready to be mass-produced. So you might want to save your money until the FUGU is closer to being actually available. 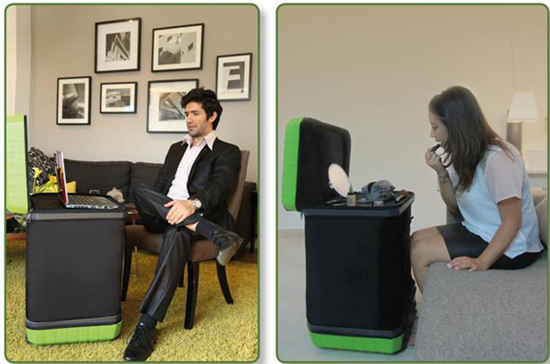 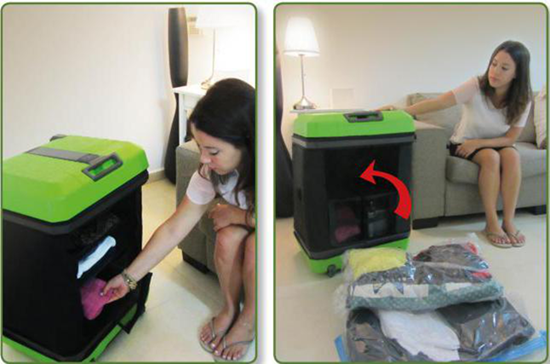 But if it delivers as promised, and is able to survive the torture test known as airport baggage handlers, having a single bag for short or long travels is a much better idea than having to cram and store an entire luggage set in your closets. [Kickstarter - FUGU Luggage]