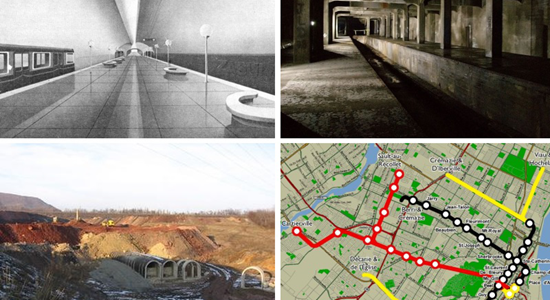 There’s something uniquely fascinating about unbuilt metros and other unfinished subway lines. The idea that - hidden away beneath our feet, in a shadowy realm unseen for decades by human eyes - there lie mysterious, sweeping tunnels that have been all but forgotten, is like catnip for the urban explorer. Just imagining the secrets these places hold is enough to pique the curiosity of those with a passing interest in hidden history. But such places are also historically important in their own right, revealing a city’s past and the many layers upon which it’s built.

Thankfully, we don’t have to only imagine them. In this article, you’ll find a list of unbuilt metros, subways, and rapid transit systems that, once started, failed to be finished. Some went no further than the planning stages. Others actually broke ground. At least one is set to eventually open, but the rest lie united by their failure; the death grand engineering visions on the hard shores of political reality. 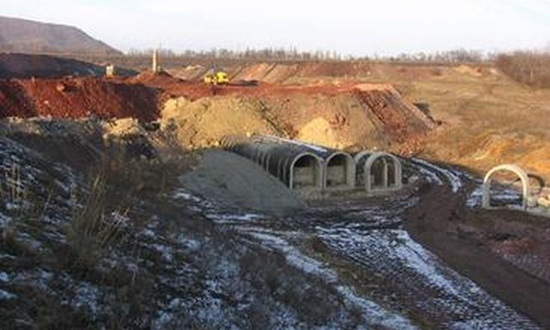 On the far eastern fringe of Europe’s largest country sits the troubled industrial city of Donetsk. Once a powerhouse of Soviet mining and metallurgy, Donetsk suffered heavily immediately after the fall of the USSR. Investment faltered and post-Soviet corruption threatened to ruin the city. Although construction of four of the metro’s first six subterranean stations was underway by the early 2000s, the equivalent of £40 million had been spent on the project by 2003, and workers could no longer be paid. The city’s troubled economy, combined with worker strikes, would see the Donetsk Metro put on hold. 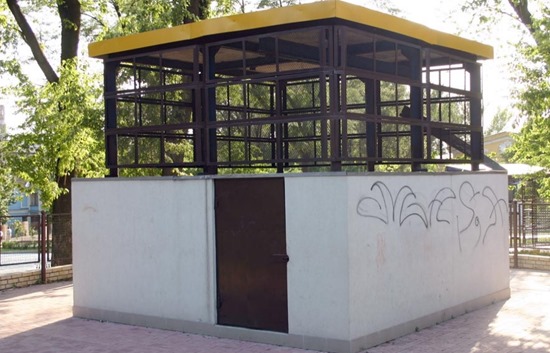 As a result, the project was already in freefall by the time Ukraine’s Euromaidan protests began in late 2013. What happened next would put the final nail in the unbuilt metro’s coffin. War erupted along Ukraine’s eastern edge, as pro-Russia separatists declared an autonomous Donetsk People’s Republic. The subsequent fighting devastated the city. To date, 10,000 people have died; the highest number of war dead in Europe since the Bosnian War. 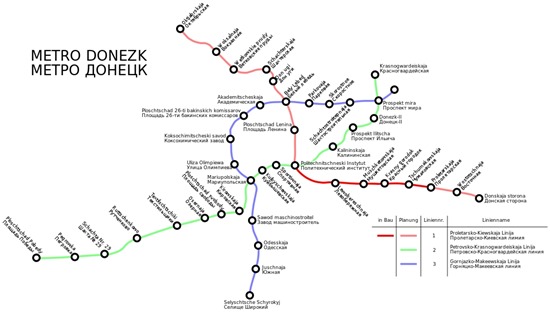 Looking at the original metro plans now is like looking at a blueprint for a future that never happened. With three lines and over 40 stations, the Donetsk Metro could have been spectacular. 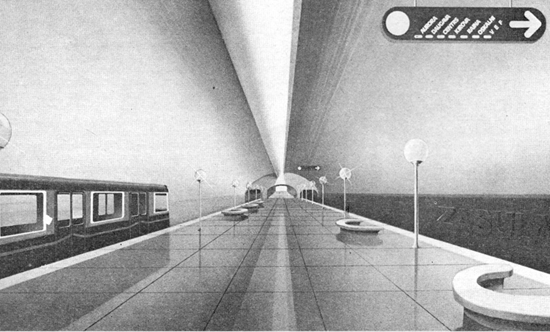 Pictures of the unfinished Riga Metro resemble something out of a Soviet sci-fi film, all sweeping tunnels, geometric designs and heavy, peculiar pillars. There’s a good reason for this. The project was first proposed in the 1980s, when Latvia was still a part of the USSR. Its projected completion date of 2021 meant it would be the piece of infrastructure taking Latvians into the 21st century. That meant a metro future generations could be proud of. 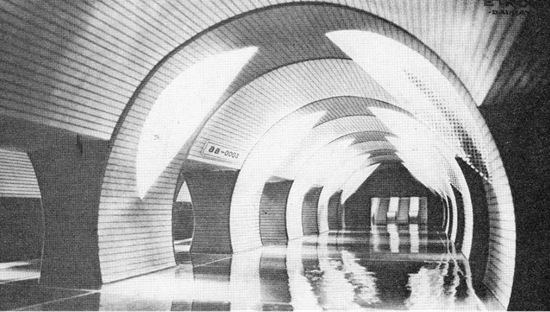 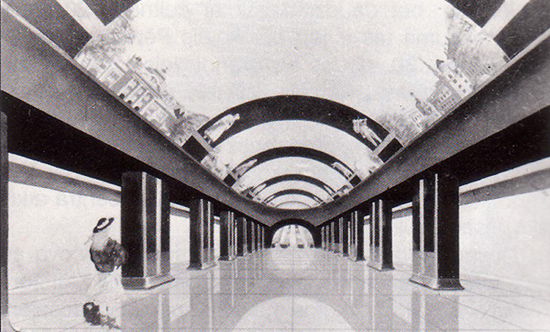 With hindsight, this seems rather naïve. Latvia was chafing at Communist domination, and dissatisfaction was already setting in. Before long, the metro itself would become a symbol of everything wrong with the regime in Moscow, fuelling the flames of public anger. When the Singing Revolution of the late 1980s brought the pro-Russian regimes in the Baltic states tumbling down, Riga’s proposed rapid transit system metro was abandoned. 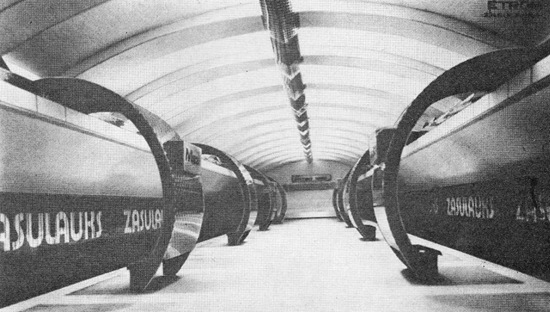 Since Latvian independence, Riga’s population has declined, to the extent that it no longer makes much sense to build a subway system. It’s unlikely the unbuilt metro will be revived any time soon. 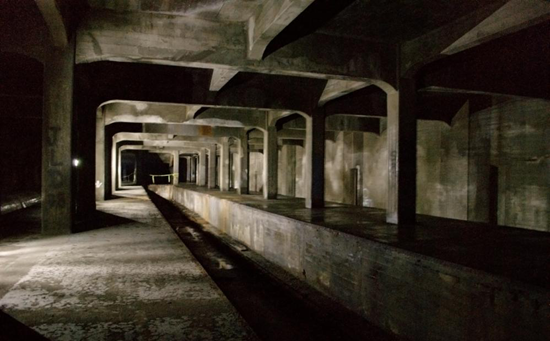 We’ve featured the abandoned Cincinnati Subway on Urban Ghosts before, and with good reason. Its 2.2 miles of completed, long-abandoned tunnels are one of the eeriest, most-haunting sights in the world of lost subterranean rapid transit. Great concrete pillars accumulate damp and dust in a shroud of darkness.  Blind rodents scuttle in the eternal night. It’s the sort of place you could imagine meeting Morlocks, toiling away hidden from the surface folk. 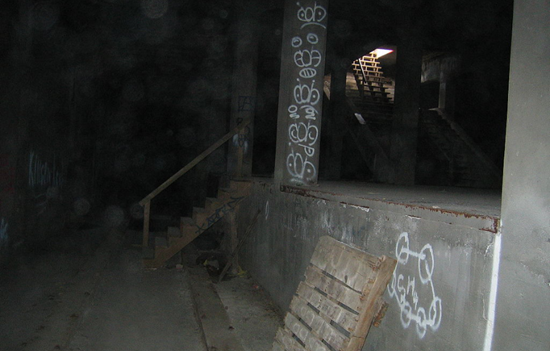 The backstory of the abandoned Cincinnati Subway makes a great, cautionary tale of thwarted ambition. Proposed during the first days of US entry into World War One, and revived in the heady years of the Jazz Age, the 26 km line would’ve ensnared the city in a loop of steel. Yet even this wasn’t ambitious enough. As America rolled in the profits of the boom years, more and more stations were added. The plans got bigger. Something had to give. 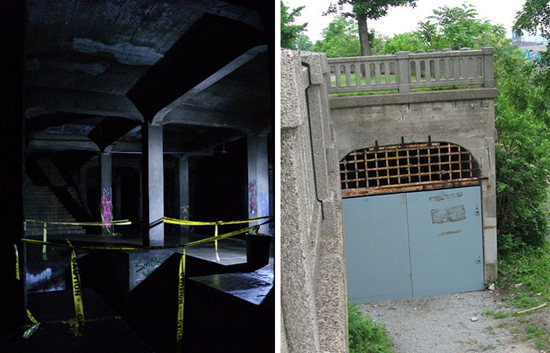 And give it did. On October 29, 1929, the global stock market collapsed. The dream of the unfinished Cincinnati Subway was swept away on the tide of the Great Depression, never to return. The platforms of the abandoned Race Street station, and other unfinished metro tunnels on the system, have endured in the gloom ever since.

Few abandoned subway lines have had such a short life as that of Eglinton West in Toronto. When the 2011 transit expansion plan was first announced back in 1985, it was to be a mere bus line. Upgraded to a subway in 1986, the proposed rapid transit system nonetheless remained in the realms of the intangible until as late as 1994, when funding was finally granted. Ground was broken on August 25, 1994. On June 26, 1995, Mike Harris was elected Premier of Ontario. He immediately cancelled Eglinton West. ‘Construction’ had lasted less than a year.

Today, almost no traces remain of the unfinished metro line. The excavation that had already begun was cancelled, the hole refilled with dirt. Now only diagrams remain of the proposed route and the 13 stations it would have taken in. An ignominious end for what was once lauded as the city’s most-progressive piece of future urban infrastructure. 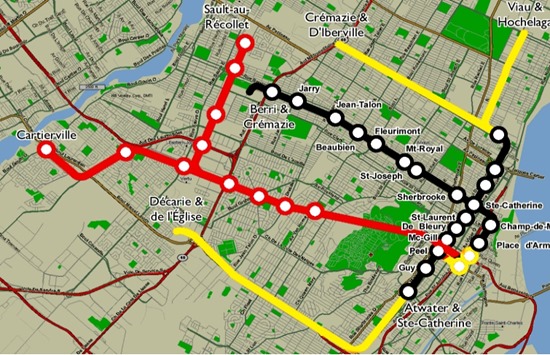 The late 1980s and early 1990s must have been a dispiriting time to be a Canadian metro planner. Aside from Toronto’s axed Eglinton West line, there were at least two proposed metro lines in Montreal that didn’t make the final cut. Known colloquially as the ‘Red’ and ‘White’ line (conveniently representing the colours of the Canadian flag), they were first proposed in the 1960s and 1980s, respectively. At one point totalling nearly 30 stations between them, the unbuilt metros were both completely abandoned by 1990, victims of changing transport priorities.

The demise of these two lines was not totally in vain. Parts of the Red line’s tracks were subsequently folded into the Deux-Montagnes line, and its abandonment allowed funds to be diverted to the still-operational yellow line. 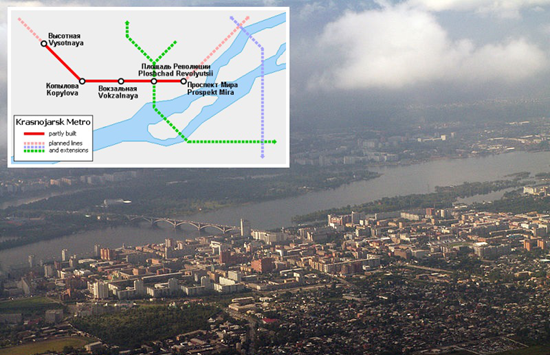 Lost in the middle of the vast emptiness that is Siberia, the city of Krasnoyarsk is a place of concrete, mild affluence, and cancelled plans for the future. Around 51 hours away from Moscow by train, Krasnoyarsk has long dreamed of installing its own metro line to compete with its bigger brothers out West. But funding has proved difficult to come by. Although construction technically started in 1995, it barely managed 500 metres of track. Suspended indefinitely in 2015, the project is now, to all intents and purposes, dead.

This has been a point of contention in the city for a remarkably long time. Home to one million inhabitants, Krasnoyarsk is bigger than many cities that have their own functioning subways. Prague is a similar size and has a wide underground network. Lausanne has a population of under 200,000 and boasts a rapid transit system. Yet government funding for Krasnoyarsk’s own version has not been forthcoming. Nor does it seem likely that the unfinished metro will ever be realised. 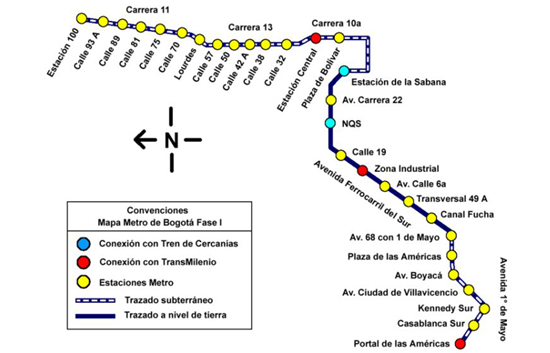 Nestled high up in the Andes mountains, rain-lashed Bogotá is home to eight million people, with a further three million in its metro area. It’s a place of grimy streets, barely-contained chaos, and traffic gridlock that has to be seen to be believed. This last part is largely due to the Colombian capital’s unbuilt metro system, and continuously stalled plans to bring it into being. First proposed in the 1950s, the proposed rapid transit system was originally meant to ease congestion in a city of one million citizens. Over 60 years later, residents are still waiting.

Instead, the city has connected itself via a rapid transit bus system known as the Transmilenio. Revolutionary when it was introduced in 2000, the Transmilenio has been starved of funds since 2004, and now exists in a state of chronic dysfunction. 2.4 million people ride its overloaded lines every day, with boarding at stations taking over 45 minutes in rush hour. Yet, there is hope. In 2014, construction finally began on the first stretches of long-anticipated Bogotá metro. The initial line may be open as soon as 2022. 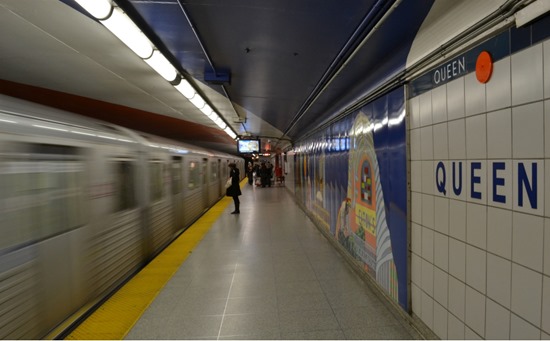 Image: Raysonho; Queen station, which would have connected to Queen subway line.

As we saw with the Bogota metro, a proposed subway line can go through many decades of planning before getting approval. The story of the Queen Subway Line in Toronto is even more impressive. It shows how unbuilt metros can go through years of planning, only to end up completely abandoned.

The 13-station line was formally proposed in the aftermath of World War Two, but its origins lie even earlier. The Queen Subway Line was first planned back in 1911, when Toronto’s city engineers suggested running a streetcar system underground. Their provisional plans were also what the line drew upon when proposed in 1946, giving the whole operation a remarkable feeling of continuity. A small part of it was swiftly built, and it seemed certain that the Queen Subway would soon be up and running.

So what happened? The costs simply didn’t stack up. Although construction was still ongoing in 1973, by 1975 it was decided that there simply wasn’t enough passenger demand along the proposed route. The failed Queen Subway Line was binned, for good this time. Remarkably, stretches of the unbuilt metro system still survive beneath Queen Street to this day. 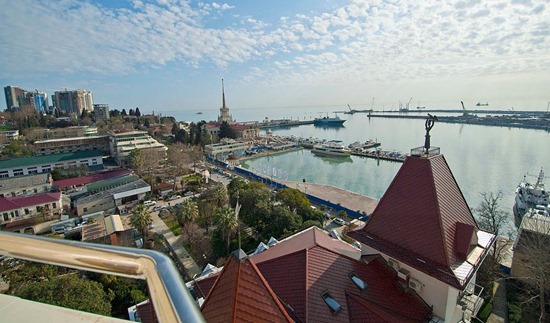 When the 2014 Winter Olympics were first announced for the Russian Black Sea resort of Sochi, city officials saw a rare chance to splurge on a major infrastructure project. With hundreds of athletes and tens of thousands of spectators expected, it was decided to build a vast subway, stretching all the way from the airport, to the town centre, to the Olympic venues. The Sochi Light Metro would serve 24 stations, over three lines. Just like the London Overground established for 2012, it would completely revitalise rundown parts of the city.

Sadly, the plans never went ahead. Although a rail link between the airport and Sochi itself was set up by 2013, the rest of the project was shelved due to rising costs and a looming deadline. Instead, the city railway was extended to cope with the influx of visitors predicted for the Winter Games. With the opportunity the Olympics presented missed, it now seems likely Sochi will never get its entire longed-for metro. 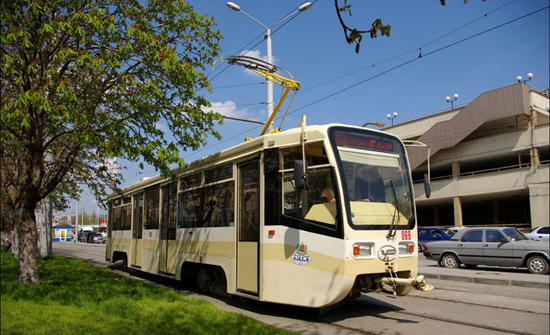 If you were to cross Ukraine’s troubled eastern border near Donetsk and head south, you would eventually reach the Russian city of Rostov-on-Don. Lying at the southern extremity of the vast, featureless East European Plain, this city of nearly two million is the gateway to the Caucasus; a place far more cosmopolitan and wealthy than most cities in the area. Yet even in such a region, heavy hitter as Rostov has its difficulties. The city metro has been trapped in the planning stage since the 1970s.

As in Krasnoyarsk, funding has simply not been forthcoming. While multiple feasibility studies have been carried out, and detailed plans drawn up, actual construction of the rapid transit infrastructure has remained elusive. Despite completion dates being announced as regularly as clockwork, actual work has never begun. While a Rostov Metro may yet one day spring into existence, the medium-term outlook is doubtful. For the foreseeable future, the unbuilt metro will exist only on the architect’s drawing board, and as brief mentions in articles like this one.