9 PRIVATE ISLANDS YOU CAN ACTUALLY VISIT 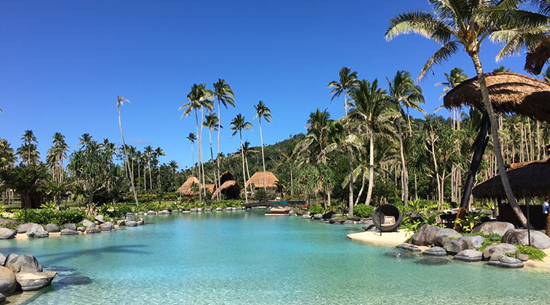 It usually takes a fortune to buy an entire island, no matter how small it might be. Luckily, you do not have to be a billionaire to spend time on a private island. Many such places, including Richard Branson's Necker Island and Red Bull founder Dietrich Mateschitz's Laucala Island (pictured top), have accommodations that anyone can reserve (although they rarely come cheap).

Some resorts have embraced this idea by taking over an entire landmass so they can cater to guests with a "Lifestyles of the Rich and Famous" fantasy, and a few of these destinations take advantage of their location to offer a range of experiences that are impossible to find in more crowded destinations.

Here are nine private islands you can actually visit. 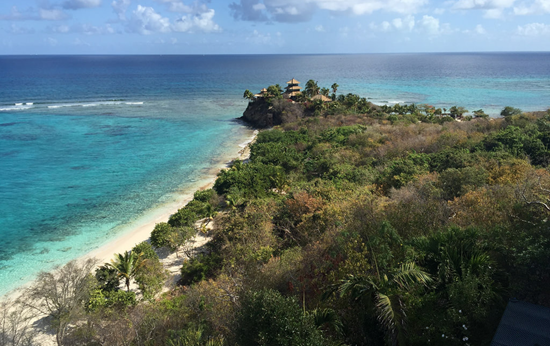 This member of the British Virgin Islands is owned by Virgin Group founder Sir Richard Branson. The 74-acre Necker Island was completely uninhabited until the late 20th century, when Branson bought it - at age 28! - reportedly for only US$180,000. He set about turning the undeveloped land into a small resort featuring Balinese style villas that could accommodate around 30 people.

In addition to the expected array of spa treatments, dining options and pools, Necker offers water sports, tennis courts and plenty of beaches and nature trails. This is certainly a destination for the jet set (renting out the entire island costs around US$65,000 per day, though single villas are also available), but it is also a good place for nature-lovers. Branson is active when it comes to nature conservation, and Necker has a population of endangered iguanas and flamingos. Even various species of sea turtles come to Necker to nest. 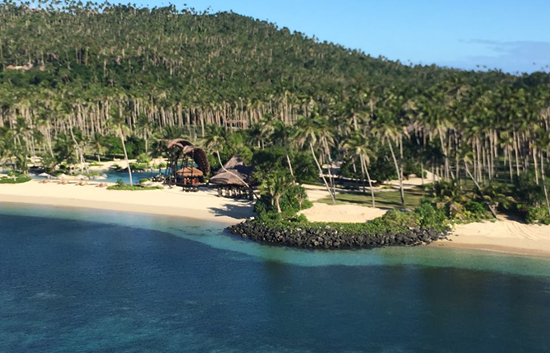 Laucala Private Island is located in Fiji. The 3,000-acre landmass was once owned by publishing mogul Malcolm Forbes. He loved the island so much that he decided to be buried there. After Forbes passed away, Red Bull founder Dietrich Mateschitz bought the island from his heirs.

Mateschitz built a resort with 25 villas designed in the style of traditional Fijian bures (grass-roofed cottages). Like Necker, Laucala is a favorite destination for celebrities. It has a few extravagances, such as its own submarine, and it is not cheap (rates average more than US$4,000 per night). However, nature and sustainability are an important part of the Laucala experience. Fruit and vegetable farms and even a herd of cattle allow the island to produce almost all of its own food. The hinterlands are mostly undeveloped, and a favorite pastime for guests is snorkeling among hawksbill turtles just off the island's shore.

Song Saa is a 27-villa resort spanning two sister islands near the Cambodian city of Sihanoukville. Some accommodations are in the jungle, some on the beach and some on over-the-water platforms. Even with more than two dozen villas, nature is the dominant force here. The water and reefs around the islands are protected, and guests can tour nearby villages and mangrove forests.

Song Saa puts a premium on relaxation and spiritual rejuvenation. Its spa and wellness treatments focus on stillness and inner peacefulness as well as on the physical body. The resort owners operate a foundation that works to preserve habitats in the Koh Rong Archipelago and to better the lives of local people in the area. Song Saa is also currently developing a solar array that will provide power to the resort and neighboring villages. 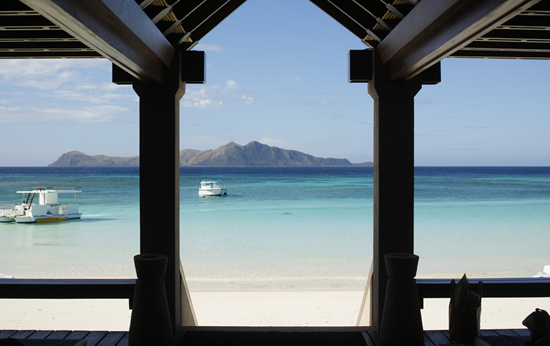 Amanpulo is the only property on 250-acre Pamalican Island in the Philippines. This region of insular Southeast Asia is known (and loved) for its white sand beaches. Pamalican has perfect examples of this kind of tropical idyll.

Amanpulo consists of 42 casitas modeled after traditional island dwellings called bahay kubo. The reefs around Pamalican are ideal for diving, especially since the resort has created a kind of self-made marine sanctuary that protects the coral and its inhabitants from fishing and excessive boat traffic. In addition to beach-side casitas, Amanpulo has tree-top units and villas that sit on the hillside to cater to guests who value panoramic views above all else. 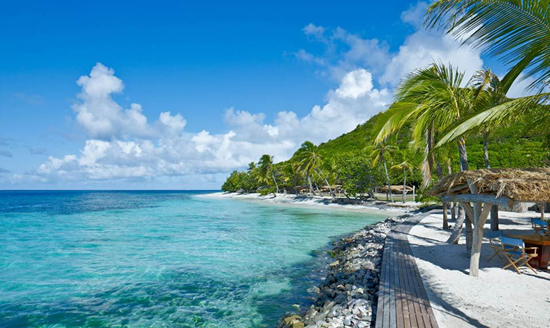 Petit Saint Vincent, 40 miles from Saint Vincent in the Grenadine islands, is home to a single resort with 22 villas and cabins built into the bluffs above the coastline and along the beach. The island is dominated by dense forest and surrounded by approximately two miles of white sand beach. The all-inclusive resort, run by the Small Luxury Hotels of the World chain, is not as expensive as you might guess. One- and two-bedroom villas usually go for between a mere US$1,000 and US$2,000 per night, depending on the season.

There are no vehicles on the island and most of the land remains covered with forest, so the biggest draw here is the sense of privacy that guests feel even though there are others on the island. Petit Saint Vincent also has a high degree of self-sufficiency with its own power sources and an onsite water desalination plant.

Most of Guana Island is covered by a nature preserve, but it also has a small resort on its 850 acres. Despite being one of the Caribbean's most pristine white sand beaches, the island's current lack of hotels and resorts fits with its history. Originally settled by Quakers in the 18th century, it was eventually purchased by an American couple who built stone cottages and invited artists and other creatives to stay for extended working vacations.

In addition to upgrading the accommodations, the island's current owners undertook restoration projects to bring back the native plant and animal species. This included reintroducing endangered iguanas and tortoises. The island also has three protected reefs just offshore. Guana Island, which was named one of the best resorts in the Caribbean by Conde Nast in 2016, has relatively reasonable rates, with shoulder-season prices below US$1,000 per night.


This member of the Seychelles off the coast of East Africa has a long history, but it has only recently come onto the tourism scene. The island, which has a total area of only three-quarters of a mile, was the site of the first recorded landing in the Seychelles in 1609. Following the collapse of the copra plantation, the island fell into disuse and became overrun by invasive species. In 1997, new owners began to restore the island to an earlier state.

The addition of bungalows by a South African ecotourism firm turned North Island into a sought-after nature destination. The accommodations are decidedly luxurious, and the island has become a favorite destination for celebrities. The Duke and Duchess of Cambridge, for example, spent their honeymoon here. 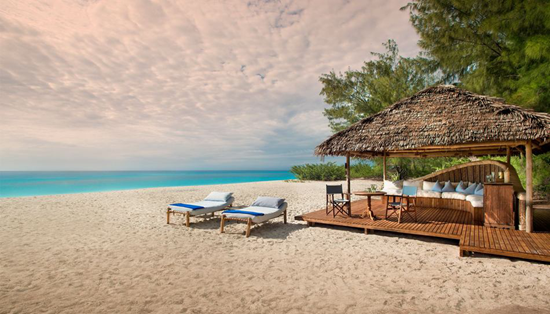 Mnemba Private Island can only accommodate 20 guests in 10 bungalows. Located just off the northeastern coast of Zanzibar, Mbemba is ideal for both a beach getaway and a dive vacation. The resort is run by &Beyond, a company that specializes in lodges and tours that fall into the adventure/safari niche.

The resort has a dive school and offers kayak and snorkel tours that take advantage of its location in the middle of the Mnemba Island Marine Conservation Area. The island itself is home to a number of rare bird species, including the miniature-sized suni antelope and the endangered Aders' duiker. 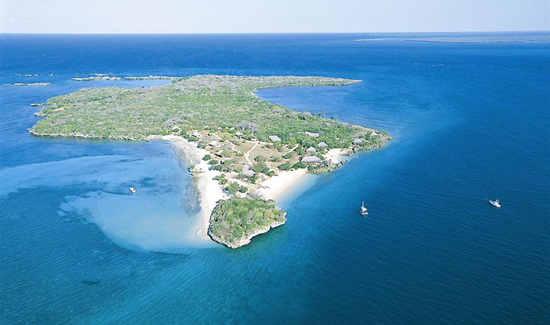 Quilalea Private Island is in the middle of the Quirimbas Archipelago, a chain of islands in the Indian Ocean off the coast of Mozambique. The island has a property operated by boutique resort firm Azura, which is known for its eco-friendly practices and modern African designs. The resort features nine beachside villas. Other than these accommodations and staff quarters, Quilalea is uninhabited.

The Quirimbas Archipelago is home to a large marine sanctuary, so many of the guest activities revolve around the water and wildlife. Besides the deserted beaches, guests can kayak along mangrove forests and snorkel or dive in the reefs just offshore. Azura's spa, meanwhile, offers a unique blend of treatments based on local traditional medicine and ingredients.