10 AMAZING TREETOP WALKWAYS AROUND THE WORLD 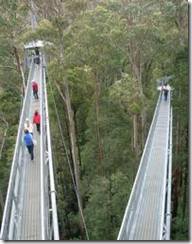 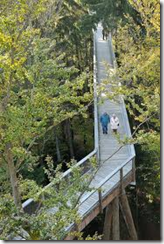 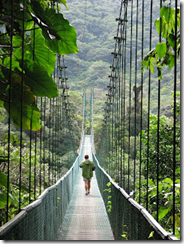 10 Amazing Treetop Walkways Around the World
By The World Geography, March 2012. 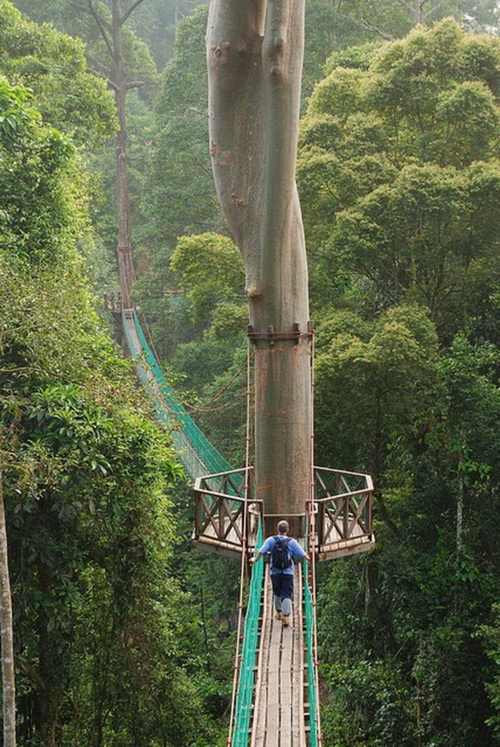 This amazing canopy walk is one of the best in the world where you explore the canopy of the forest reserve in Danum, Sabah, Malaysia. Located within a 348 sq km (134 sq mi) forest reserve, getting here is no simple task as it takes about 2-3 hours from the town of Lahat Datu in east coast Sabah via four wheel drive. The forest reserve is also one of the most pristine, where it caters to a vast reserve of lush tropical lowland forest rich in Sabah’s unique flora and fauna. The area has also been recognized as one of the world's most complex ecosystems catering to all kinds of flora and fauna. 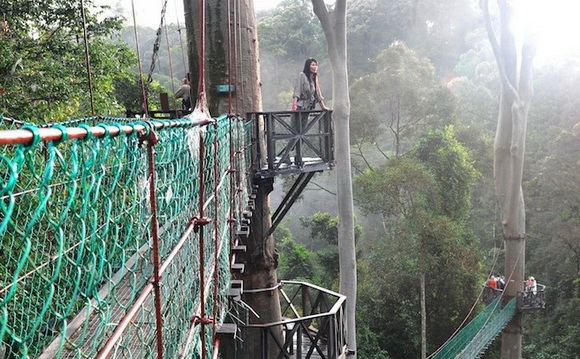 To fully experience Danum Valley and the amazing canopy walk here, one must book a stay at the Borneo Rainforest Lodge which is one of the unique luxurious resorts located in the middle of the rainforest. For birdwatchers, they will surely appreciate the 300-meter-long (985 ft) and 27-meter-high (90 ft) canopy walkway which offers a peek into abundant bird life in the forest canopy here. The Walkway is designed and engineered to be “tree friendly” without rigging any of the steel cables direct onto trees. Also, a three level intersection makes the canopy one of the most unique in the world. 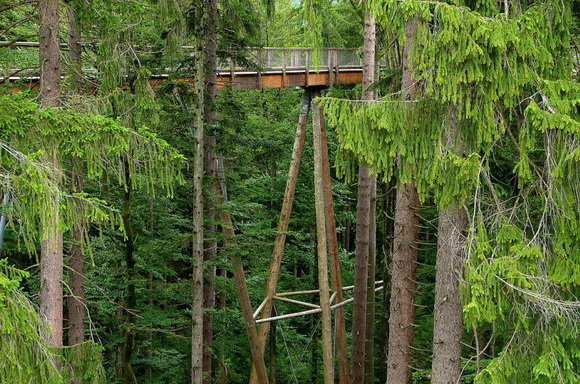 Opened two years ago in Neuschonau, Bavaria, in Germany, the tree-top walk is the longest of its kind at 1300 meters (4,250 ft) that takes you to an impressive height of 25 meters (80 ft) above the tree tops. The walkway ends at an oval shaped dome, 44 meters (145 ft) high. The 360-degree spiral staircase around the dome offers breathtaking views of the surrounding nature. In clear weather you can even see the north ridge of the Alps. The tree-top walk is a part of the largest protected forest area in central Europe - Bavarian Forest National Park, which is also the first national park in Germany. 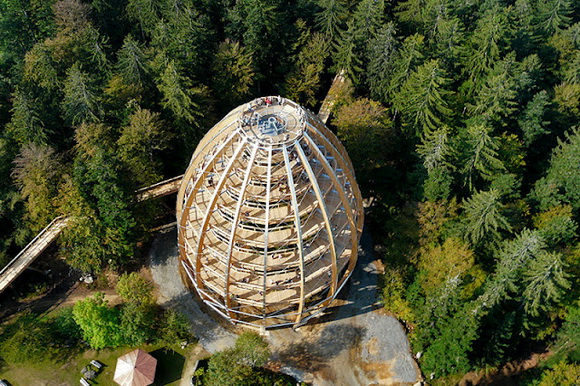 Several adventure stations are placed along the walkway including a narrow wooden plank enticing hardy trekkers to balance on the beam. These obstacles are fully-enclosed with a safety net and offers a rewarding view of the earth 50 feet below. The observation dome is shaped like a giant egg. Once at the top, a spectacular view awaits the visitors. 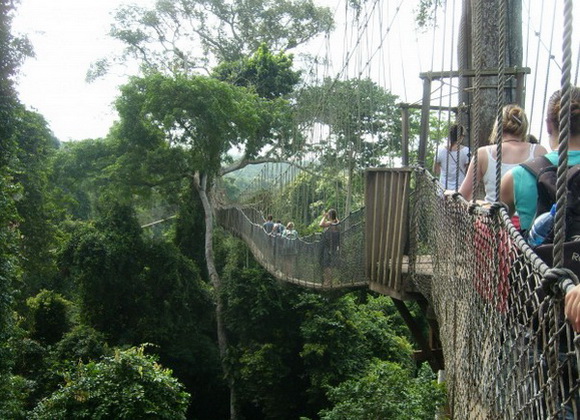 Located in Kakum National Park in the West African country of Ghana, Africa's only canopy walkway is suspended 100 feet (30m) above the ground, offering you what is truly a bird's eye view of the rainforest. At this height, you don't have to be an expert to identify the colourful patterns of tropical birds as they glide through the forest below you. 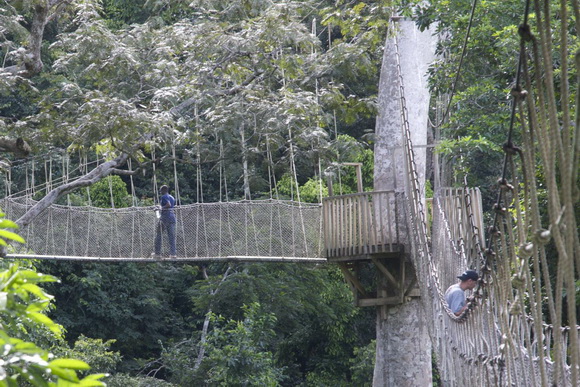 The Canopy Walkway passes over 7 bridges and runs over a length of 330 m (1,080 ft). It is secured by a series of nets and wires for safety purposes. An additional viewing platform that will allow visitors to climb into the canopy without braving the Canopy Walkway is currently under construction. This Canopy Walkway was built by two Canadians from the city of Vancouver. 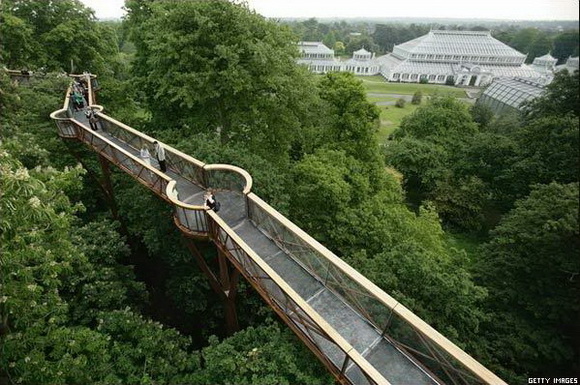 The Xstrata Treetop Walkway at Kew Gardens opened in May 2008 and at 18 meters (60 ft) high, it offers visitors the chance to explore the tree canopy and see magnificent views across London including the London Eye (observation wheel), which was designed by the same architects (Marks Barfield Architects). 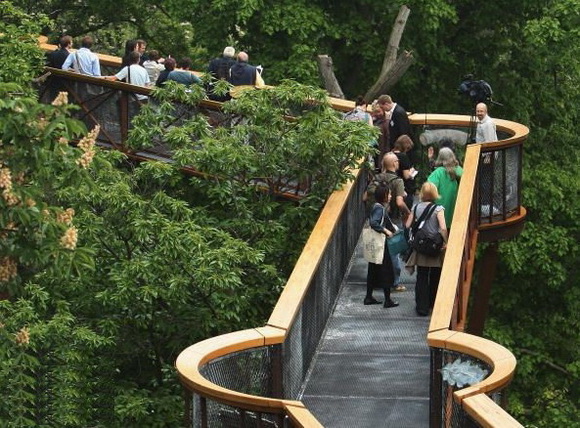 There is no other treetop walkway that starts underground, like this treetop walkway, but it makes sense to learn about the roots of trees before winding your way up to the treetops. The roots are the most important part of a tree but they couldn't be exposed so you can see interesting animatronics and a wonderful bronze sculpture of tree roots. The Xstrata Treetop Walkway can accommodate 3,000 visitors a day and it is 200 meters (650 ft) long walkway. 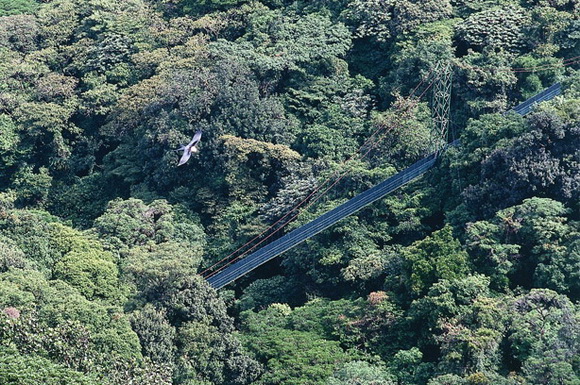 The Sky Walk is a well-thought-out combination of suspension bridges and walking trails through the Monteverde rainforest. These bridges span canyons and drainages, and bring visitors face to face with the upper level of the forest canopy. 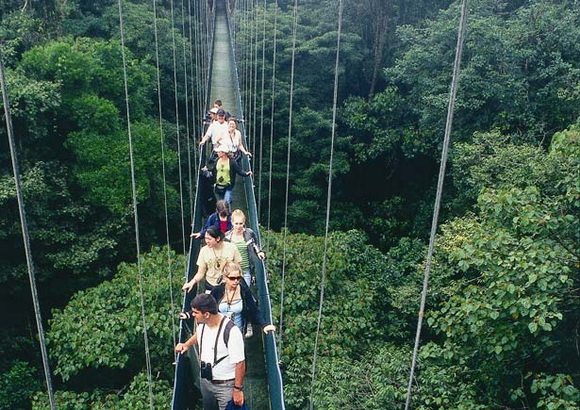 There are six bridges in total, the longest of which spans some 984 ft (300 m). The trails extend for slightly over a mile and a half (2.5 km), making this tour extremely feasible for anyone in moderate shape. The climb is not strenuous or muddy, as the trails are well-maintained and generally very flat. Local guides accompany each tour and help visitors learn about native plant and animal species. Because there is a 12 person maximum capacity per bridge, reservations are recommended, especially in July and August and from December till May. 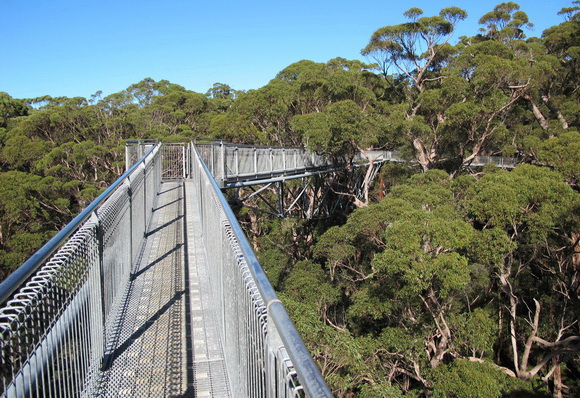 This tree top walk is located west of Denmark and east of Walpole on the Southern Ocean Coast of Western Australia. Situated in the heart of the Valley of the Giants, it is an internationally recognised nature-based tourism attraction. The Tree Top Walk (600m or 1,970ft long and 40m or 130ft high) has a gentle gradient, suitable for children and all ages, including wheelchairs and strollers. 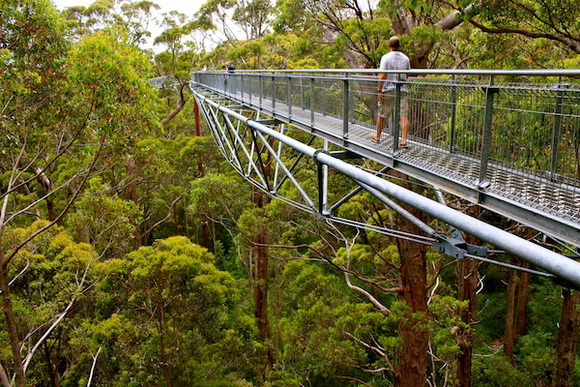 A walk through a grove of more than 400-year-old giants is known as the Ancient Empire. The 600-metre boardwalk has been designed as an interpretive experience, to explore the science, fantasy, intrigue and the grandeur of the old trees. The path leads visitors to one of the most popular of the gnarled veterans, known as Grandma Tingle, or the Gatekeeper. The second section of the Ancient Empire walk is a mixture of boardwalk and stabilised earth paths which winds in and out, up, over and through seven more giants. 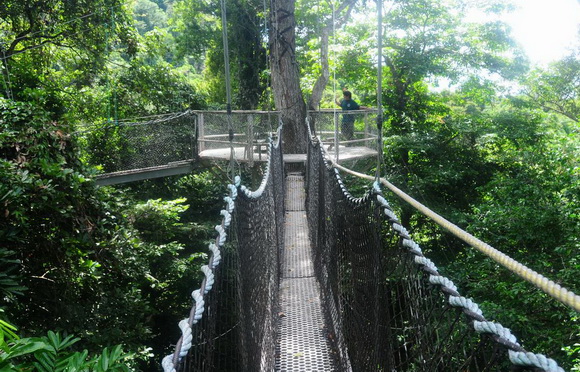 The Iwokrama Canopy Walkway is a series of suspension bridges and decks of up to 30 metres (100 ft) in height and 154 metres (500 ft) in length, located in the Iwokrama Forest, Guyana. It gives visitors a new view of the mid and upper canopy of the forest and allows wildlife to be relatively free from human intrusion. 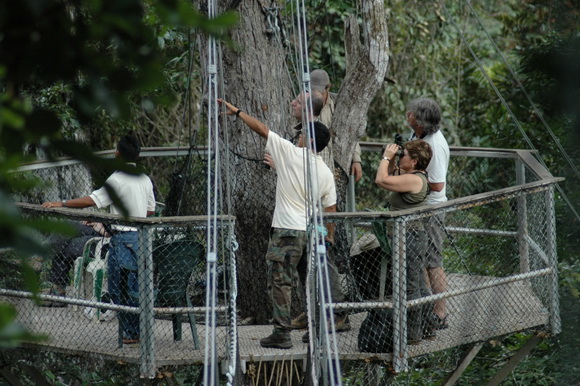 The forest around the walkway contains some important flora and fauna.  Among these are endangered and protected species such as the jaguar, the bullet wood tree, greenheart and the waramadan (endemic in Guyana only to the Iwokrama Forest). The canopy walkway also serves as a great lookout point for the Maipa mountain range and on the trail to the walkway visitors can observe a rock with petroglyphs (rock carving) and a strangler fig tree, both of which have interesting stories. 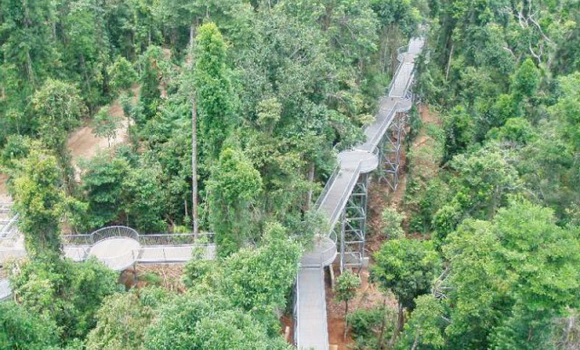 The Mamu Rainforest Canopy Walkway is a spectacular walk through the canopy of World Heritage rainforest. It is an iconic new tourist attraction in the Wet Tropics. With a 350 metre (1,150 ft) long elevated walkway through the canopy, a cantilever, a 37 metre (120 ft) observation tower and more than 1200 metres (3,950 ft) of walking tracks, this attraction certainly has the “wow” factor. 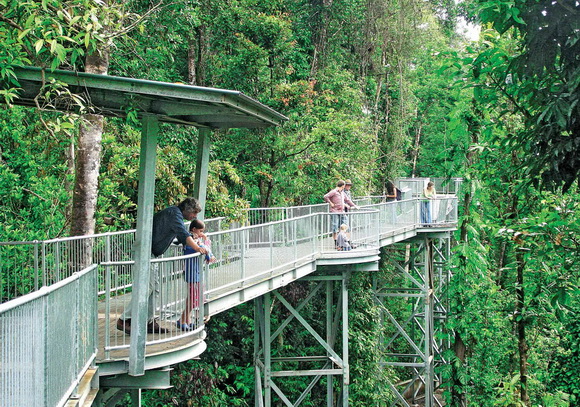 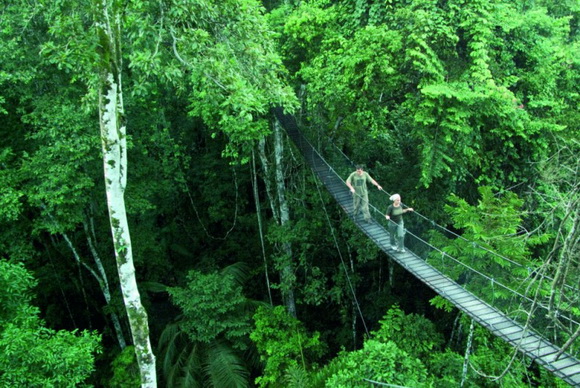 This 344-meter (1,135-feet)-long complex of seven hanging bridges, six treetop observation platforms, and two 29-meter (95-feet)-tall towers - woven through the crowns of the tallest trees - offers visitors glimpses of rare and unusual flora and fauna, impossible to see from the ground. 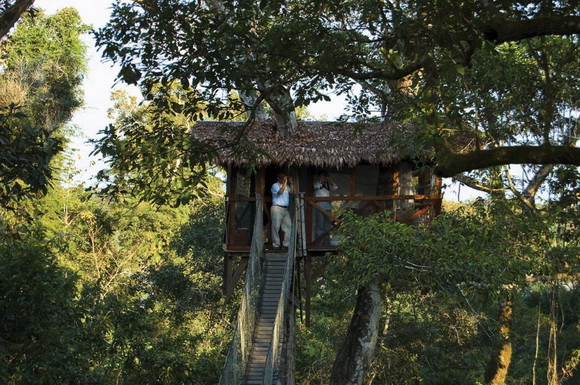 It is considered one of the safest canopy walkways in the world. The ground-level Interpretation Centre is packed with information about the rainforest and its ecology. Funding for the canopy project was provided by the World Bank and the National Geographic Society. 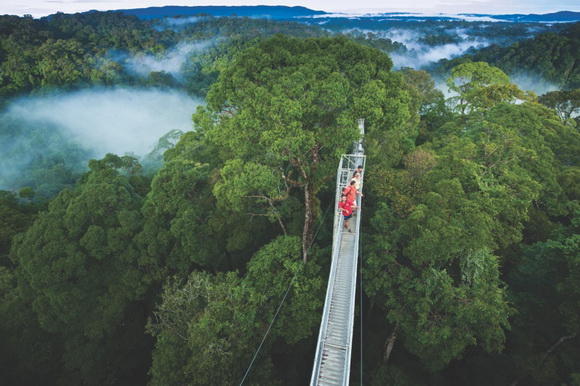 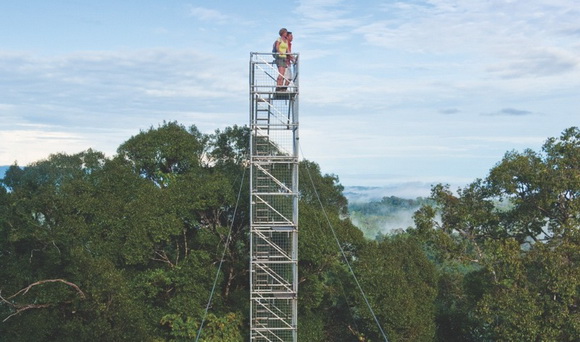 Tourists at the top of a lookout tower at Ulu Temburong National Park, Brunei - photo source

From the canopy walkway there are tremendous views of the virgin forest and you can see wildlife including birds, butterflies and monkeys. A series of tree houses linked by hanging bridges are excellent observation points. Most people visit on tours which can be arranged in Bandar Seri Begawan or the administrative centre of the Temburong District, Bangar.