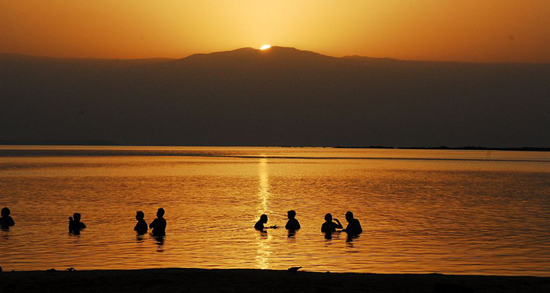 For centuries, humans have had a fascination with finding the "fountain of youth." Ponce de Leon famously looked for a cure for old age in the Americas during the Age of Exploration, and references to similar searches date all the way back to Ancient Greece. Though no one has located water - or any other material - that can provide eternal youth, plenty of places are believed to increase general wellness and to heal or improve certain conditions.

Some mineral-rich hot springs, for example, can clear up skin problems or bring temporary relief to arthritis sufferers. But it's not only springs that have healing properties. Other wellness destinations focus on more offbeat materials - mud, seaweed, algae - instead of mineral water.

Though promises of miracle cures seem far-fetched, these natural wellness destinations will certainly cure the most common cause of premature aging: stress. 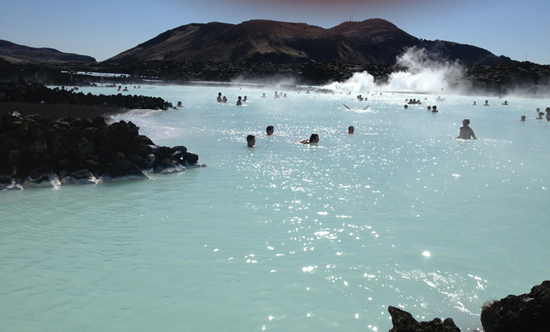 The Blue Lagoon is one of Iceland's main attractions. Less than an hour’s drive from Reykjavik, this man-made body of water was formed in the 1970s using the output from a geothermal power plant. The water is rich in silica and sulfur. During the early years of the lagoon's existence, people would come to take a dip in the warm (99-102 degrees Fahrenheit) ponds. Those with skin problems like psoriasis began to notice major improvements after their swim. This led to facilities being designed for use by the general public in the late 1980s and early 90s.

The Blue Lagoon is indeed blue. It has a kind of milky sky color because of all the silicate minerals that it contains. Rates for soaking start at approximately US$50 (depending on the exchange rate), but over the years the facility has developed to include a spa that offers different skin and general wellness treatments for an additional cost. 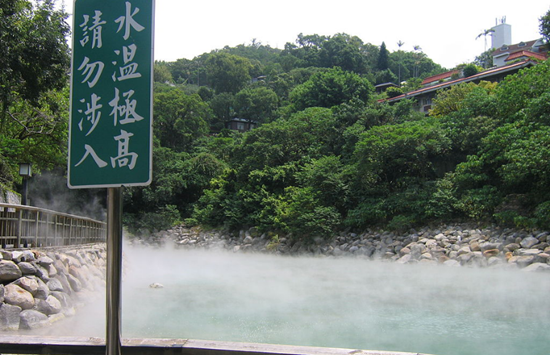 Beitou Hot Springs Park is right next to Taiwan’s largest city, Taipei. Visitors can walk across the street from the MRT train station and take a dip in the public soaking pools of this suburban wellness destination. These pools are the most popular part of Beitou, but other attractions include Thermal Valley - sometimes called by its nickname, Hell Valley - which features constantly steaming geothermal waterways.

Private spas flourish here. Some, like the Yitsun Hotel, date back more than a century, while others have a more modern, glitzy appeal. The heat, minerals and sulfur in Beitou's water is said to offer all sorts of health benefits, from general detoxification to arthritis relief. Whether or not you believe that these ailments can really be cured, Beitou is certainly one of the easiest natural wellness destinations to reach. 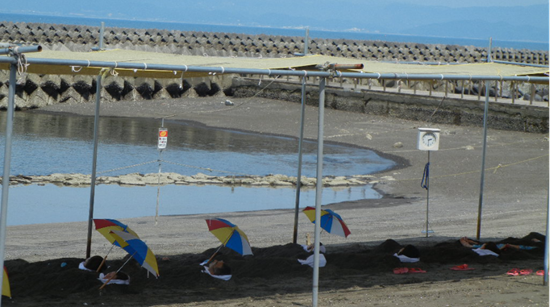 The Japanese island of Kyushu is known for its geothermal springs. In Ibusuki, however, people do not come to soak in water, but in sand. Like mineral-rich springs, the sand here is said to provide certain health benefits. Many people believe that the potency of the minerals is enhanced because they are being buried in a solid material instead of soaking in liquid.

Ibusuki's spa-goers are, quite literally, buried in the sand with only their heads remaining above ground. Aside from general detoxification (the sand is hot enough to make you sweat profusely) and beautification, a treatment session, which typically lasts about 15 minutes, could be beneficial for people with anemia, asthma or diabetes. 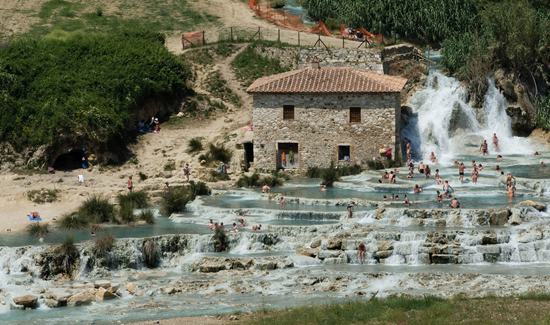 Terme di Saturnia is in Tuscany, Italy - a region often associated with wine tourism. But this visually impressive geothermal spring, a couple miles outside of its namesake town, also draws plenty of tourists. The water pours over the falls at 99.5 degrees Fahrenheit. It is rich in minerals like calcium and magnesium and in sulfurs. This combination is supposedly good for the cardiovascular and respiratory systems as well as for skin.

A luxury spa and hotel, complete with golf course and Michelin-starred restaurant, is located near the spring. In addition to offering a chance to soak in the water, the spa has a range of wellness treatments. 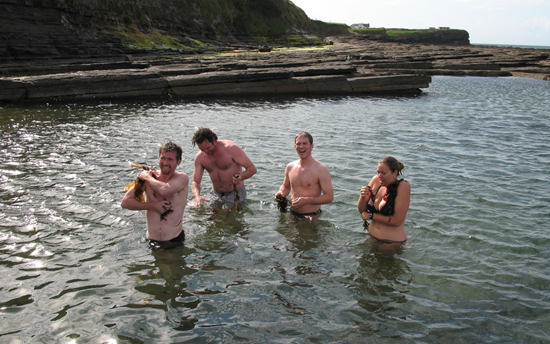 Common in seaside towns and cities in Ireland, seaweed bathhouses allow people to soak in a tub - usually a standard bathtub like you might have in your home - filled with warm seawater and seaweed. Reportedly good for curing rheumatism, arthritis, skin conditions and even hangovers, seaweed baths have long been a staple of natural wellness in Ireland.

Some of these venues sell season tickets, so locals use the baths as well; they are not a tourist gimmick. Many of the older spas, such as Kilcullen's Seaweed Bath (established in 1912), have been around for more than 100 years and are known for their historic charm as much as for their unusual treatments. 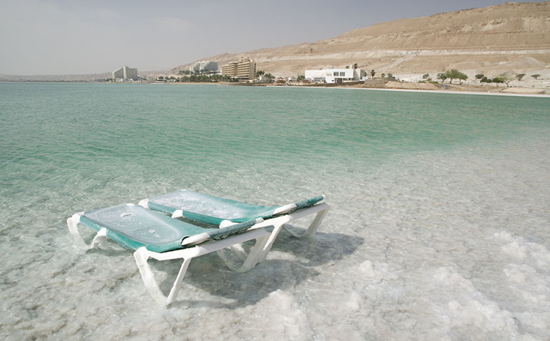 The Dead Sea is more than 1,000 feet below sea level. Sitting in between Jordan, Israel and Palestine, it has long been known as a wellness destination. The Dead Sea is saltier than the oceans (it is known as a hypersaline lake), and it has a very different mineral makeup with high concentrations of minerals like calcium, magnesium and potassium.

A soak in the Dead Sea can bring a number of different benefits. People suffering from psoriasis, arthritis and fibromyalgia have found relief from their symptoms after a swim. Some even claim that the water can slow skin aging and prevent hair loss. The region is also the site for the study and practice of climatotherapy, which seeks to treat chronic conditions with long-term stays in the unique climate in and around the Dead Sea. 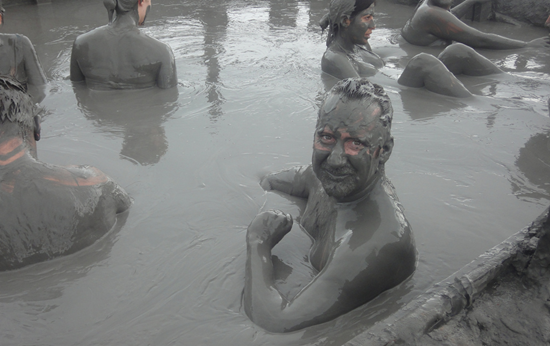 Volcán de Lodo el Totumo is not the kind of towering, stereotypical volcano you might expect. Nonetheless, this rather nondescript geographic feature about 45 minutes outside of Cartagena, Colombia, is a popular attraction. It earns spots on many tourists' itineraries because of its mud baths. The volcanic mud here has a high concentration of calcium, aluminium and magnesium.

Touted by locals for providing a number of health benefits, the mud is especially known as a general tonic for skin health. Massages are offered as part of the soaking experience (tips are expected). Because of its popularity, el Totumo can get crowded at times, though good tour guides or hotel concierges should be able to recommend an off-peak time to visit. 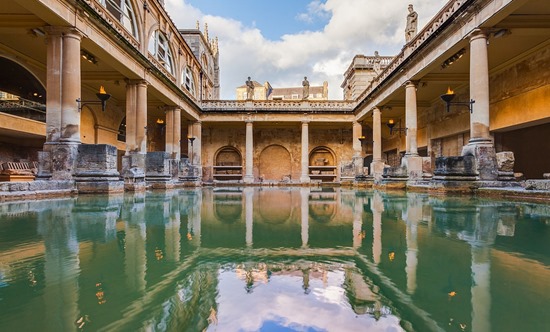 The thermal springs in Bath, a city in Somerset, have been used since the Roman Empire controlled most of what is now England. Though you cannot take a dip in the bathhouses that the Romans constructed, you can visit their remains and see the hot water steaming in the ancient pools. Bath had a more recent renaissance in the 18th century and currently has some of the best remaining examples of Georgian architecture in the U.K.

The Thermae Bath Spa allows visitors to take advantage of the time-tested power of Bath's springs, which have more than 40 different minerals that can provide benefits to people suffering from skin ailments and chronic conditions. 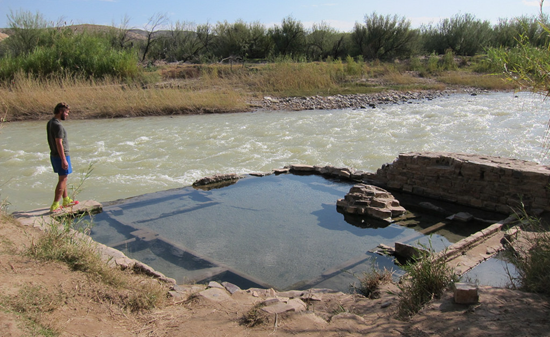 Big Bend National Park sits along the Rio Grande in southwest Texas. There are several hot springs in the area, but the Langford Hot Springs, also known as the Boquillas Hot Springs, are the biggest and most accessible. The site is named after J.O. Langford, who came to the Rio Grande in search of a cure for his chronic illness. He eventually built a bathhouse over one of the thermal pools. The remains of this structure can still be seen today.

According to the National Park Service, the spring water, which flows out of the ground at 105 degrees F, contains calcium carbonate, calcium sulfate, sodium sulfate, sodium chloride and lithium. People who make the brief hike from the nearest parking lot to dip their feet in the water sometimes have to leave disappointed. The pools are right next to the Rio Grande, and they often get flooded and can even completely disappear when the river rises. 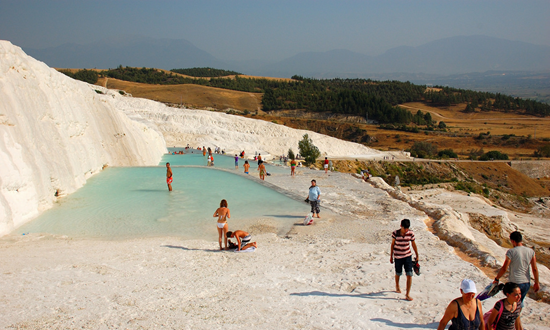 Pamukkale is a hot spring that flows over terraces made from calcium deposits. The geothermally heated water dissolves the calcium when it is underground and then deposits it again when it reaches the surface and cools. The water is too hot for soaking in some of the pools, but in lower pools, where it cools to around 95 degrees, people can take a dip. Health benefits include relief from asthma, rheumatism and circulatory and respiratory diseases.

Once only known among locals, Pamukkale became a UNESCO World Heritage Site in the 1980s and started gaining attention from international travelers. To protect the pools from damage, visitors cannot wear shoes in the water, and only certain pools are open for swimming.