SHOWDOWN IN SYRIA: ALL ROADS LEAD TO TEHRAN 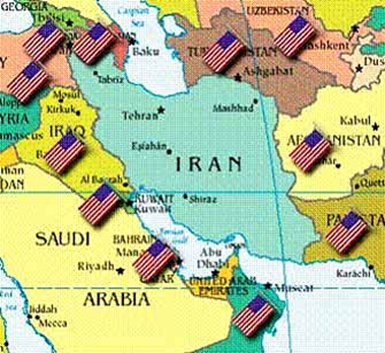 This article presents the other side of the Syrian story, not the propaganda churned out by western media. Neither Syria nor Iran poses a threat to the US or the west, yet it and its people have become the victims of western-style state-sponsored terrorism. The Syria case also shows clearly the duplicity of the western powers. 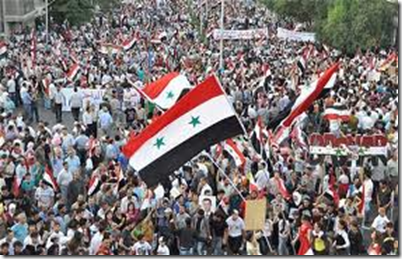 ­This might explain the growing turmoil in Syria that’s being used to try to promote a Libya-like UN Security Council resolution which, if passed, would certainly have Libya-like results…

In recent days, there has been horrific violence in the Syrian city of Homs, as more than 200 people have died in gunfights and bombings. For the Western mainstream media, all the blame lies with Bashar al-Assad’s government, with President Obama spelling out the official line: “Assad must halt his campaign of killing and crimes against his own people now. He must step aside and allow a democratic transition to proceed immediately.” The Western Allies’ strategy of encroachment on Syria and Iran seems to run in parallel and sequentially. Its logic is: if Syria falls, Iran will follow.

As with Iraq and Libya, the US, UK and France tried to impose a UN Security Council resolution laying all the blame on the government, and calling for its immediate resignation. Only this time they’ve been vetoed by Russia and China, who are standing up to the west’s global bullying tactics.

No small matter indeed! For it hinges on how the western allies on one side, and the Russians and Chinese on the other understand the root causes of violence and turmoil in Syria and, by extension, throughout the region. On Syria, the official US/UK/French/Israeli line is that the “Arab Spring” has finally reached Syria. In their usual Hollywoodesque boxing match-like “Good Guys versus Bad Guys” worldview, they seem to tell global public opinion, “in this corner we have heroic freedom-fighters trying to bring “democracy” (US brand, of course!) to Syria; in that corner, we have the mean, fundamentalist antidemocratic Assad regime repressing the people”. It might sound like a great script for some teary-eyed Stephen Spielberg thriller, but the real world isn’t like that…

Rather than saying it’s simply the Assad government turning against its people, Russia and China take a more balanced stance on the internal affairs of Syria, where several factions are in conflict. There are the legal authorities of Syria, and there are armed terrorist throngs taking advantage of genuine social grievances and unleashing violence throughout the country, which in turn triggers police repression. With lesser intensity, similar scenes can also been seen on the streets of London, Manchester, New York, Oakland, Athens and other western cities.

In Syria, such groups are in all likelihood profusely armed, trained, financed and abetted by foreign players, pointing straight at US, UK, French and Israeli intelligence entities: public, private, official, unofficial, overt and covert.

Clearly, this is a much more complex view than Washington’s and London’s easier-to-grasp Walt Disney version of reality with its “bad cat fighting good Tweety Bird” rhetoric.

The UN resolution the western allies are trying to get imposed on Syria is based on a report and proposal emanating from the Arab League under its present Secretary General Nabyl El Araby, which has regressed into a pro-western political and diplomatic tool. Something similar happened to the International Atomic Energy Agency (IAEA) under its present Director General Yukiya Amano, as it recently produced a damning report on Iran´s nuclear program based on “intelligence from member states”, implicitly, the US, UK, France and Israel.

What’s happening in Syria today is very bad news for the Syrians, who are becoming the victims of western-style state-sponsored terrorism. Alas! It is, however good news for the rest of the world. And it has made Russia and China stand up to the US, UK, France and Israel: Russia and China are not ready to tolerate a re-run of Iraq and Libya.

It seems today’s foremost geopolitical problem is that the forces running the United States, United Kingdom, France and Israel are increasingly out of control. They have no qualms in risking global nuclear war if that’s what it takes to achieve their political, financial – even Messianic! – objectives. They clearly must be stopped.

A year ago, the western allies launched clandestine operations triggering the so-called Arab Spring, which has brought hundreds of thousands of deaths, injuries, and the destruction and demise of Libya.

Would the western allies dare to include Iraq, Afghanistan and Palestine in their list of Arab Spring countries, recommending that they too rise up in arms against their invaders?

Syria is yet another example of western double standards. The west complains about Bashar al-Assad fighting the very terrorists they finance, but says nothing when Israel launches cluster and phosphorus bombs over Gaza’s civilians. They overran Libya “to protect civilians”, but discretely looked the other way when their Egyptian military semi-allies repressed the people, kicking young women senseless on the streets of Cairo.

As US President Franklyn D Roosevelt once replied when an aide pointed out to him that Nicaraguan dictator Anastasio Somoza was a complete SOB: “Yes! He is a SOB, but he’s our SOB…!” 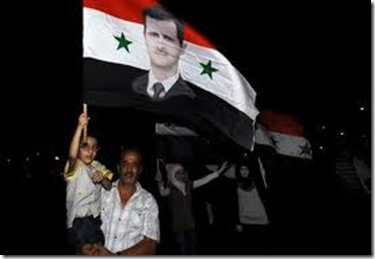 Right now, Syria is being dragged towards civil war. Can we believe everything the western media report and western governments parrot? Remember the “take-out-Saddam-if-you-don’t-want-to-see-a-mushroom-cloud-over-one-of-our-cities” rhetoric?

Today, Syrian news agency SANA gives a very different story on the Homs episode, reporting that “armed terrorist groups on Monday attacked citizens and law-enforcement members at several areas in Homs… the authorities were pursuing and clashing with them. Armed terrorist groups exploded two explosive devices behind the building of the Technical Services at al-Dablan Neighborhood in Homs. Terrorists also shelled with mortars several quarters in Homs, while others broke into houses in Idleb Governorates. A number of citizens escaped from an armed terrorist group to a mosque in Rastan City, where the armed terrorist group burnt the mosque, killing and injuring some of the citizens”. Why doesn’t the western media report this?

Think of it: if Mossad, the CIA and MI6 are suspected of assassinating Iranian nuclear scientists on the streets of Tehran in veritable exercises of blatant state-sponsored terrorism, couldn’t they be doing this on a much vaster scale inside Syria?

Every time we see horrendous, yet unclear, violence – whether in Egypt, Syria, Iran, Libya, 9/11 in New York or 7 July in London, – two key factors must be unravelled: (1) who benefits? (2) follow the money (who’s paying for the bombs, logistics, bullets, satellite and drone support?)

Perhaps the US, UK and France want to attack Iran, going first through Syria.

Perhaps Israel wants to attack Iran, going directly at it.

Probably, these are two sides of the same coin…